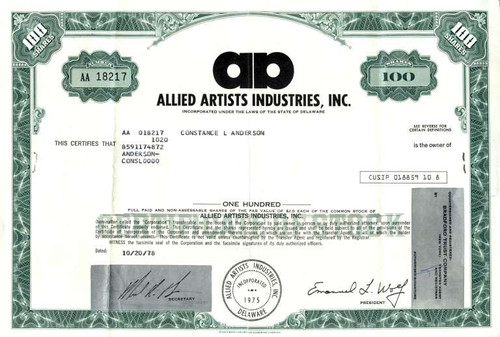 Beautifully engraved certificate from the Allied Artists Industries, Inc. issued in 1978. This historic document was printed by the Security Columbian Banknote Company and has an ornate border around it with a vignette of the company's logo. This item has the printed signatures of the Company's President and Secretary. 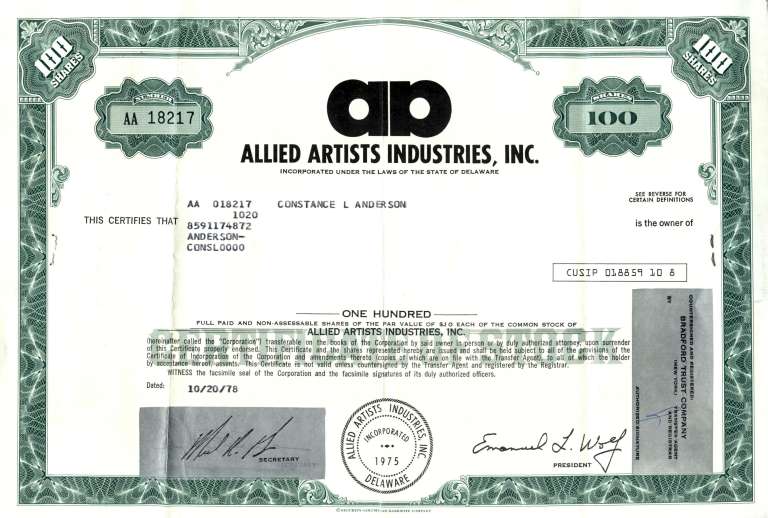 Certificate Vignette
Allied Artists Industries shares were issued in 1976 to shareholders of Allied Artists Pictures Corporation. Allied Artists International, Inc. is an entertainment company which works on movies, television, music, games, and other media products. The company is the successor to Allied Artists Pictures Corporation (formerly known as Monogram Pictures Corporation). In 1971, Allied Artists Pictures Corporation formed subsidiary Allied Artists Records. Embroiled in a contentious bankruptcy, Allied Artists Pictures Corporation transferred its interest in the Allied Artists trademarks to Allied Artists Records on June 17, 1983 to enable production and distribution to continue. On October 6, 2000, Allied Artists Records filed for a newly designed mark, which became registered on December 25, 2001. On April 1, 2001, Allied Artists Records changed its name to Allied Artists International, Inc. and assigned its trademarks to reflect the corporate name change. After the assignment of intellectual property between the original Allied Artists Pictures Corporation and Allied Artists International, 445 titles were released under the Allied Artists brand through the year 2009, with additional titles in production and scheduled for release in years to come. Producer Walter Mirisch began at Monogram Pictures after World War II as assistant to studio head Samuel "Steve" Broidy. He convinced Broidy that the days of low-budget films were ending, and in 1946, Monogram created a new unit, Allied Artists Productions, to make costlier films. At a time when the average Hollywood picture cost about $800,000 (and the average Monogram picture cost about $90,000), Allied Artists' first release, It Happened on Fifth Avenue (1947), cost more than $1,200,000. Subsequent Allied Artists releases were more economical but did have enhanced production values; many of them were filmed in color. The studio's new policy permitted what Mirisch called "B-plus" pictures, which were released along with Monogram's established line of B fare. Mirisch's prediction about the end of the low-budget film had come true thanks to television, and in September 1952, Monogram announced that henceforth it would only produce films bearing the Allied Artists name. The studio ceased making movies under the Monogram brand name in 1953 (but was later reactivated by Allied Artists International). The parent company became Allied Artists, with Monogram Pictures becoming an operating division. Allied Artists did retain a few vestiges of its Monogram identity, continuing its popular Stanley Clements action series (through 1953), its B-Westerns (through 1954), its Bomba, the Jungle Boy adventures (through 1955), and especially its breadwinning comedy series with The Bowery Boys (through 1957 with Clements replacing Leo Gorcey). For the most part, however, Allied Artists was heading in new, ambitious directions under Mirisch. For a time in the mid-1950s the Mirisch family had great influence at Allied Artists, with Walter as executive producer, his brother Marvin as head of sales, and brother Harold as corporate treasurer. They pushed the studio into big-budget filmmaking, signing contracts with William Wyler, John Huston, Billy Wilder and Gary Cooper. But when their first big-name productions, Wyler's Friendly Persuasion and Wilder's Love in the Afternoon were box-office flops in 195657, studio-head Broidy retreated into the kind of pictures Monogram had always favored: low-budget action and thrillers. Mirisch Productions then had success releasing their films through United Artists. Allied Artists ceased production in 1966 and became a distributor of foreign films, but restarted production with the 1972 release of Cabaret and followed it the next year with Papillon. Both were critical and commercial successes, but high production and financing costs meant they were not big money makers for Allied. In 1975 Allied distributed the French import film version of Story of O but spent much of its earnings defending itself from obscenity charges. Monogram/Allied Artists survived by finding a niche and serving it well. Probably the best-known tribute paid to Monogram came from French New Wave pioneer Jean-Luc Godard, who dedicated his 1960 film Breathless to Monogram, citing the studio's films as a major influence. The company lasted until 1979, when runaway inflation and high production costs pushed it into bankruptcy. The post-1936 Monogram/Allied Artists library was bought by television producer Lorimar; today a majority of this library belongs to Warner Bros. Entertainment. The pre-1936 Monogram library became incorporated into that of Republic, today a part of Viacom-owned Paramount Pictures. History from Wikipedia and OldCompany.com (old stock certificate research service)