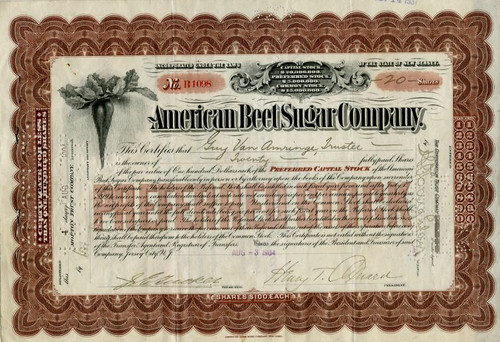 Beautifully engraved certificate from the American Beet Sugar Company in 1904. This historic document was printed by the American Banknote Company and has an ornate border around it with a vignette of a beet. This item has the signatures of the Company's President, Henry T. Oxnard and Secretary. 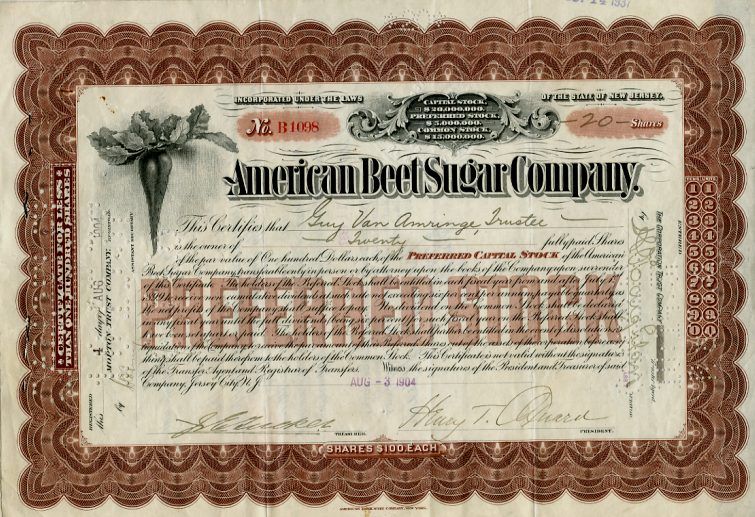 Certificate Vignette
Henry Thomas Oxnard (June 23, 1861 in Marseilles, France - 1922) was an American entrepreneur who gave his name to the City of Oxnard. Mr. Oxnard was president of both the American Beet Sugar Company (which later changed its name to American Crystal Sugar Company) and the American Beet Sugar Association, which represents all the beet sugar factories in the United States. He and his brothers controlled five sugar factories in the United States. Ancestry With a French and English ancestry, Oxnard was born while his parents resided abroad in Marseilles, France. Henry T. Oxnard's ancestor came to America in 1740 and settled in Boston, having been sent by Lord Montague, the father of Freemasonry in the New World, to further the establishment of that order in its new home as the provincial master of all America. Since then the Oxnard family has been prominent in New England Americans of the most progressive type. The mother of Henry T. Oxnard came from an old French family of Louisiana, ancestors that where dating back to the Capetian dynasty. In 1860 Oxnard's father sold his sugar cane plantations and refinery in Louisiana, and by doing so was able to escape the dangers of the American Civil War by traveling to France where Henry was born the year the war started. Youth Oxnard grew up in a house in Massachusetts. This countryside life gave him a special affection for the out-door life style and the idea to start his first business in raising chickens on an extensive scale. Adulthood In 1889, Oxnard and his associates established a sugar refinery in Grand Island, Nebraska.. In 1891, two more plants were built in Chino California and Norfolk, Nebraska. In 1899 the Oxnard plant of future fame was built and in that year the four were renamed the American Beet Sugar Company. Interview On July 10, 1904 The San Francisco Sunday Call published an article dedicated to Henry T. Oxnard, which contained the following text by the Interviewer about Mr.Oxnard : I wanted to see Henry Thomas Oxnard, one of the manipulators and dictators of beet sugar businesses and policies in the wide United States, to draw my own conclusions as to the personality of a man who had long occupied so prominent a place in the public eye. I had some difficulty in setting track of him. I missed him at the home of a relative, In the city, who rang the keynote of the man's life story and character when she said: "You have to get up early to catch him. He's small, I know, but he has always been full of purpose." When you know Henry T. Oxnard you realize that pugnacious tenacity of purpose is the dominant trait in his character. When you simply meet him his nose and chin cry out this fact at you. His grayish eyes, set well apart In a clear complexion, express the kindliness which Is part of him. Under the aggressive mustache the straight lips are those of a man who can say "no" if need be. The forehead, broad and deep, which meets a somewhat sparse covering of slightly sandy hair, betokens brains of the solid, practical, achieving sort. His round head is well set above good shoulders and a stout,comfortable looking body of medium height. Not a brilliant outward makeup, but keen, wideawake and business-like. 1899: The American Beet Sugar Company is formed as one of the first sugarbeet producers. 1925: American Beet acquires Minnesota Sugar and Northern Sugar. 1926: Company constructs sugarbeet processing plant in East Grand Forks, North Dakota. 1934: American Beet changes its name to American Crystal Sugar Company. 1948: Moorhead, Minnesota, processing plant is completed. 1954: Third processing plant is built in Crookston, Minnesota. 1965: Fourth American Crystal plant begins operations in Drayton, North Dakota. 1972: Two Midwestern sugarbeet cooperatives are formed: Minn-Dak Farmers Cooperative and Southern Minnesota Beet Sugar Cooperative (SMBSC). 1973: American Crystal is transformed into a grower-owned cooperative. 1975: The Red River Valley Cooperative and its processing plant in Hillsboro, North Dakota, is absorbed by American Crystal. 1982: American Crystal, Minn-Dak, and SMBSC form a joint venture, Midwest Agri-Commodities Company, to market beet byproducts. 1993: American Crystal, Minn-Dak, and SMBSC form second joint venture, United Sugars Corporation, the largest beet sugar marketing company in the United States. 1995: American Crystal, Minn-Dak, and Golden Growers Cooperative form ProGold Limited Liability Company to build and operate a wet corn milling plant. 1997: United States Sugar Corporation joins the United Sugars alliance, creating a nationwide sugar marketer; United Sugars begins a national rollout of Pillsbury Best Sugar. 1999: American Crystal increases its sugarbeet acreage to 500,000. History from Wikipedia and OldCompany.com (old stock certificate research service)