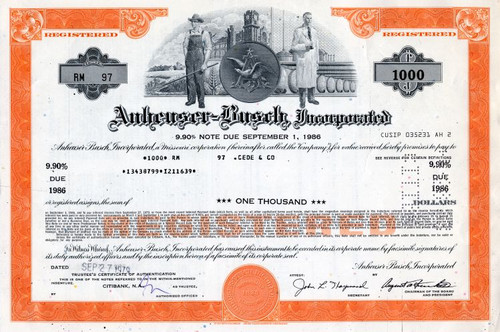 Beautiful certificate from the Anheuser-Busch, Incorporated. This historic document was printed by the Security Columbian Banknote Company and has an ornate border around it with a vignette of a farmer and scientist standing in front of the Anheuser-Busch factory. This item has the printed signatures of the company's president/chairman (August A. Busch Jr.) and its secretary and is over 29 years old. 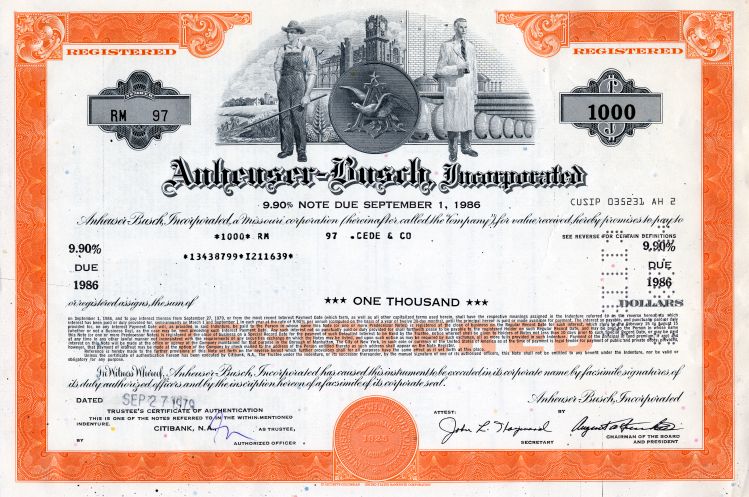 Certificate
In 1860, Eberhard Anheuser (1805-1880), a successful St. Louis businessman, first financed a loan for a struggling local brewery and later bought up the interests of minority creditors. Four years later, his son-in-law--Adolphus Busch--joined the company as a salesman. Adolphus eventually became a partner and then president of the company. As the driving force that took a struggling local brewery and transformed it into an industry giant, Adolphus is considered the founder of the company. The strategic vision of Adolphus included a dream for a national beer market and a national beer that would appeal to virtually every taste. To accomplish this, he created a network of railside icehouses to cool cars of beer being shipped long distances and launched the industry's first fleet of refrigerated freight cars. Later, he pioneered in the use of pasteurization to ensure beer's freshness wherever it was consumed. In 1876, Adolphus collaborated with his close friend, Carl Conrad, to create a new beer brand--Budweiser--which now outsells all other brands in the world. Twenty years later, Adolphus developed another beer brand--Michelob--that soon became the pre-eminent superpremium U.S. beer, a position it retains to this day. Several successive generations of Busch family leadership have contributed to the company's present-day success. August A. Busch, Sr. (1865-1934) guided the company through three major crises in succession--World War, Prohibition and the Great Depression by innovating and diversifying the company into several new areas, including the production of corn products, baker's yeast, ice cream, soft drinks and commercial refrigeration units. (Many of these operations were discontinued after Prohibition ended in 1933.) Adolphus Busch III (1891-1946) turned the company's baker's yeast operations into the nation's leader, a position it held until this subsidiary was sold in 1988. Through the leadership of August A. Busch Jr. (1899-1989), the company built eight regional breweries; increased its annual sales from 3 million barrels in 1946 to more than 34 million in 1974; and began diversifying into family entertainment, real estate, can manufacturing and transportation. Under the current leadership of August A. Busch III (1937-), the company has opened three breweries and acquired one; introduced numerous beer products to meet changing consumer preferences; acquired SeaWorld, making A-B one of the largest theme-park operators in the country; launched the largest brewery-expansion projects in company history; and diversified into international brewing and marketing, container recovery, metalized label printing and creative services. Trademarks... The A & Eagle design is the widely recognized symbol of Anheuser-Busch Companies and Anheuser-Busch, Inc. First used on the company's beer products in 1872, the trademark was registered with the U.S. Patent Office in 1877. According to the company's statement at that time, the essential elements of the design were "...the capital A and the figure of an eagle standing on the American shield." The original eagle had its wings folded back into the "A." Around the turn of the century, the eagle's wings spread outside the "A" in an uplifted, flying motion. In 1939, the Union shield was replaced with a horizontal striped shield. No record remains of the symbol's original designer or its exact meaning. The "A" stood for Eberhard Anheuser, but a question remains about the eagle. Some have said that it represented the unlimited vision of Adolphus Busch; others, that it was included as a mark of respect for America, the adopted country of the brewery's founders. Whatever the original meaning, the A & Eagle has come to symbolize the company's century-old heritage of pride and quality. On July 13, 2008, Anheuser-Busch and InBev said they have agreed to a deal, pending shareholder and regulatory approval, for InBev to purchase the American icon at $70 per share, creating a new company to be named Anheuser-Busch InBev. Anheuser-Busch would get two seats on the combined board of directors. The all-cash agreement, almost $52 billion in total equity, would create the world's largest brewer, uniting the maker of Budweiser and Michelob with the producer of Stella Artois, Hoegaarden, Leffe and Beck's, Bass, Labatt and Brahma. The two companies would have yearly sales of more than $36.4 billion, surpassing the current No. 1 brewer, London-based SABMiller. On November 18, 2008 the acquisition was completed and the company is now known as Anheuser-Busch Inbev.