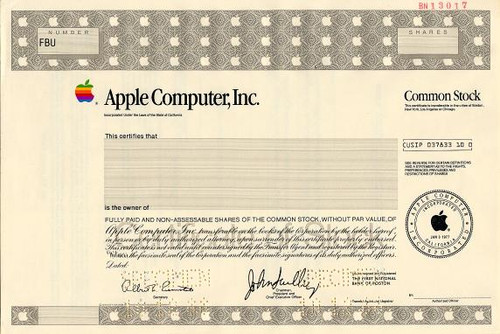 Beautiful RARE Specimen Stock Certificate from Apple Computer, Inc printed in 1988. This historic document was printed by United States Banknote Company and has an ornate border around it with a vignette of the apple logo. This item has the signatures of the Company's Chairman and CEO, John Sculley and is over 25 years old. Apple is no longer issuing stock certificates.

Apple Computer, Inc. engages in the design, manufacture, and marketing of personal computers and related software, services, peripherals, and networking solutions worldwide. It also designs, develops, and markets a line of portable digital music players along with related accessories and services, including the online distribution of third-party music and audio books. The company's products and services include the Macintosh line of desktop and notebook computers; the Power Mac line of desktop personal computers; the iPod digital music player; the Xserve server; Xserve RAID storage products, a portfolio of consumer and professional software applications; the Mac OS X operating system; the online iTunes Music Store, a portfolio of peripherals that support the Macintosh and iPod product lines; PowerSchool software product, a Web-based student information system for K-12 schools and school districts; and a variety of other service and support offerings. It also offers various associated Apple-branded computer hardware peripherals, including iSight digital video cameras, and a range of flat panel TFT active-matrix digital color displays. In addition, the company sells a variety of third-party products, including computer printers and printing supplies, storage devices, computer memory, digital video and still cameras, personal digital assistants, iPod accessories, and various other computing products and supplies. The company offers its products to education, consumer, creative professional, business, and government customers. Apple Computer sells its products through its online stores, retail stores, direct sales force, as well as through third-party wholesalers, resellers, and value added resellers. The company operated 110 retail open stores, as of June 30, 2005. Apple Computer was founded in 1976 by Steve Wozniak and Steve Jobs. Apple Computer is headquartered in Cupertino, California Apple ignited the personal computer revolution in the 1970s with the Apple II and reinvented the personal computer in the 1980s with the Macintosh. Apple is committed to bringing the best personal computing experience to students, educators, creative professionals and consumers around the world through its innovative hardware, software and Internet offerings.