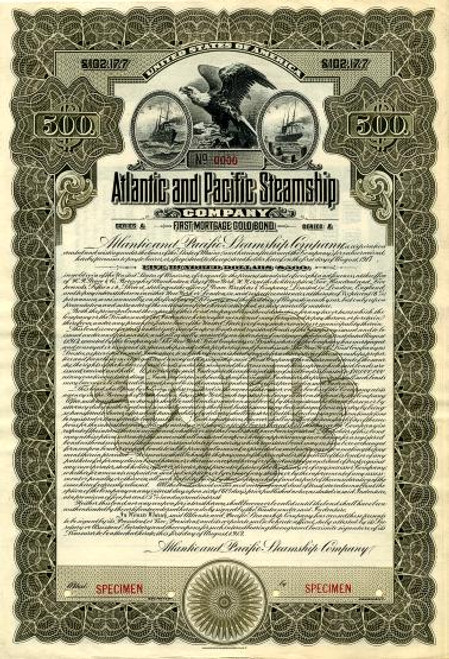 Beautifully engraved Specimen Gold Bond Certificate from Atlantic and Pacific Steamship Company dated 1913. This historic document was printed by Hamilton Bank Note Company and has an ornate border around it with a vignette of an eagle. This item has the signatures of the Company's President and Secretary and is over 108 years old. 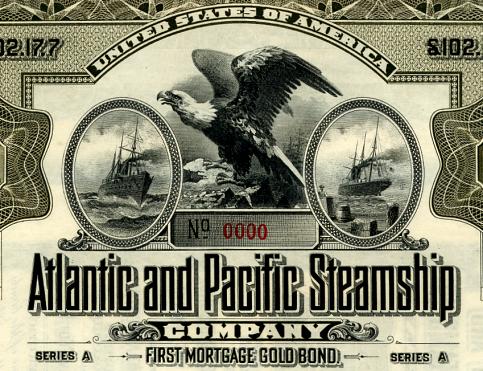 Certificate Vignette
The Atlantic and Pacific Steamship Company was controlled by the W. R. Grace & Co. The Atlantic and Pacific Steamship Company owned four steamships Santa Clara, Santa Olivia, Santa Cruz and the Malta. W. R. Grace and Co. was founded in Peru in the mid-19th century to engage in the guano trade. William R. Grace relocated to New York in 1866. What later became the Grace Line originated in 1882 as a line of sailing vessels between Peru and New York. Grace established regular steamship service in 1893 with a subsidiary called the New York & Pacific Steamship Co., operating under the British flag because ships built outside the United States were banned from US registry until 1905. US-flag service began in 1912 with the Atlantic and Pacific Steamship Company. The activities of both companies and the parent firm were consolidated into the Grace Steamship Company beginning in 1916. The firm originally specialized in traffic to the west coast of South America; then expanded into the Caribbean. After World War II, the company gradually withdrew from holdings in Latin America and finally abandoned the shipping business altogether to concentrate on chemicals in 1969. It is still in business, but not as a shipping concern. At its peak, the Grace Line was a major force in American merchant shipping. Shortly after World War II it owned 23 ships totalling 188,000 gross tons, plus 14 more on bareboat charters. The Grace Line flag was red with the word "GRACE" in blue on a white lozenge. Sources: Wedge (1926), National Geographic (1934) (showing letters with serifs), Talbot-Booth (1937), US Navy's 1961 H.O. History from Wikipedia. About Specimens Specimen Certificates are actual certificates that have never been issued. They were usually kept by the printers in their permanent archives as their only example of a particular certificate. Sometimes you will see a hand stamp on the certificate that says "Do not remove from file". Specimens were also used to show prospective clients different types of certificate designs that were available. Specimen certificates are usually much scarcer than issued certificates. In fact, many times they are the only way to get a certificate for a particular company because the issued certificates were redeemed and destroyed. In a few instances, Specimen certificates we made for a company but were never used because a different design was chosen by the company. These certificates are normally stamped "Specimen" or they have small holes spelling the word specimen. Most of the time they don't have a serial number, or they have a serial number of 00000. This is an exciting sector of the hobby that grown in popularity over the past several years.