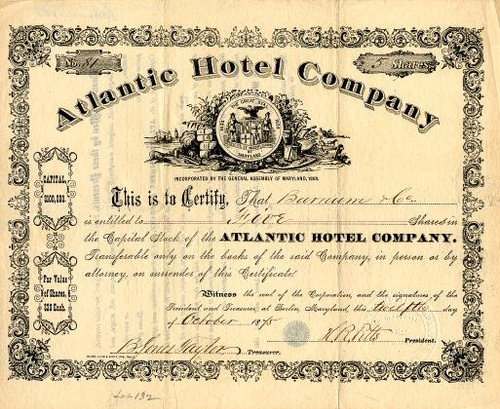 Beautiful RARE certificate from the Atlantic Hotel Company issued in 1868. This historic document was printed by Allen, Lane & Scott Printers and has an ornate border around it with a vignette of the Maryland Seal. This item has the signatures of the Company's President, Hillary R. Pitts and Treasurer, B. Jones Taylor and is over 146 years old.

Certificate Vignette
The Atlantic Hotel has long been a fixture in Ocean City. It was one of the first hotels to offer accommodations to the public. The current, three-story, H-shaped frame hotel is an early twentieth century replacement of the Victorian hotel that burned in December, 1925. The boardwalk elevation of the hotel is dominated by a single-story brick commercial front erected during the last thirty years. Despite the disfigurement of the east front, the Atlantic Hotel is one of the most prominent old hotel structures left in OC. Subtle period details such as broad hip roofs, corner pilasters, exterior brick chimneys, and six-over-six sash windows contribute to the early twentieth character of the building. In 1874 the Atlantic Hotel Company gathered at E. Stanley Toadvine's office in Salisbury to discuss the new resort. It was at this meeting that the decision was made to name the resort Ocean City. In 1876 a fifty-acre tract known as "Ladys Resort to the Ocean" was acquired by Hillary R. Pitts, B. Jones Taylor and George W. Purnell. They erected a three-and-a-half story frame hotel between Somerset and Wicomico streets facing the ocean. The 1925 fire that destroyed this building also consumed the nearby Seaside Hotel and the former Pier building. The present large building was erected in its place by Charles W. Purnell, who had acquired the hotel property in June 1922. The Purnell family still operates the business.