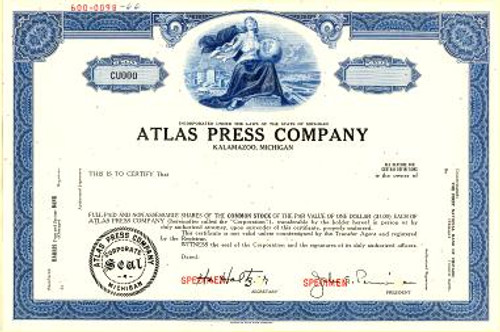 Beautiful engraved specimen certificate from the Atlas Press Company dated in 1966. This historic document was printed by American Bank Note Company and has an ornate border around it with a vignette of an allegorical woman. This item has the signatures of the Company's President and Secretary and is over 40 years old. 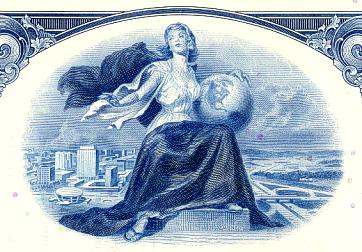 Certificate Vignette
History of Atlas Press Co. In 1919, the owners changed the company name from G.T. Eames Company to Atlas Press Company to capitalize on their image as one of the country's leading builders of arbor presses. In the 1920's, a period of strong growth for the company, the product line expanded with the addition of small machine tools, including Atlas Drill Presses and Lathes. By 1950, the Atlas product line included drill presses and lathes for metalworking applications and lathes, milling machines, shapers, planer-jointers, belt and disc sanders, jig saws, and tilting arbor saws for woodworking applications. In the early 1950's the company acquired the Clausing Lathe Company of Ottumwa, Iowa, enabling Atlas to offer metalworking lathes for the growing industrial and commercial markets. In the mid 1950's the Atlas Press Company decided to concentrate on the industrial and commercial markets for metalworking products. The company sold the woodworking equipment line to a woodworking manufacturer. Atlas Press Company began a successful mail order operation in 1976. Home hobby machinists were invited to purchase the Atlas Drill Press, the Atlas Band Saw, the Atlas Power Hack Saw, and the 6" Atlas Lathe as well as a catalogue full of accessories and non-proprietary tools. About Specimens Specimen Certificates are actual certificates that have never been issued. They were usually kept by the printers in their permanent archives as their only example of a particular certificate. Sometimes you will see a hand stamp on the certificate that says "Do not remove from file". Specimens were also used to show prospective clients different types of certificate designs that were available. Specimen certificates are usually much scarcer than issued certificates. In fact, many times they are the only way to get a certificate for a particular company because the issued certificates were redeemed and destroyed. In a few instances, Specimen certificates we made for a company but were never used because a different design was chosen by the company. These certificates are normally stamped "Specimen" or they have small holes spelling the word specimen. Most of the time they don't have a serial number, or they have a serial number of 00000. This is an exciting sector of the hobby that grown in popularity over the past several years.