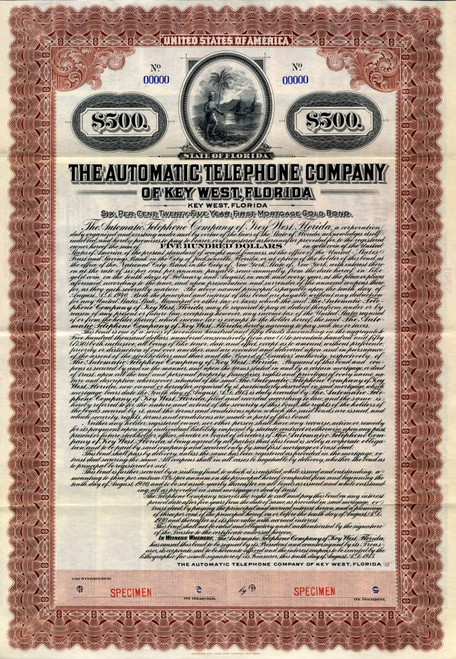 Beautiful Specimen Gold Bond certificate from the Automatic Telephone Company of Key West Florida. This historic document was printed by the Franklin Lee Bank Note Company and has an ornate border around it with a vignette of a native Indian and is over 98 years old. 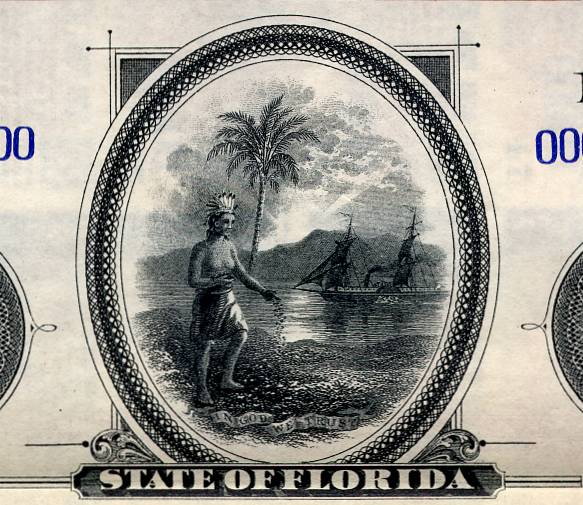 Certificate Vignette
The Bell system first came to Key West around 1901. Later, on April 5, 1917 Southern Bell purchased the Automatic Telephone Company to narrow the competitive environment in Key West, Florida. Southern Bell's first office on the island was co-located with the International Ocean Telegraph Company (IOTC), a subsidiary of Western Union Telegraph Company, at 416 Green Street. It was in this building that John W. Atkins made the first scratchy international telephone call over telegraph cable owned and operated by IOTC on December 25, 1900. The Bell Telephone Company was to become American Telephone and Telegraph Company (AT&T) in 1899. About Specimen Certificates Specimen Certificates are actual certificates that have never been issued. They were usually kept by the printers in their permanent archives as their only example of a particular certificate. Sometimes you will see a hand stamp on the certificate that says "Do not remove from file". Specimens were also used to show prospective clients different types of certificate designs that were available. Specimen certificates are usually much scarcer than issued certificates. In fact, many times they are the only way to get a certificate for a particular company because the issued certificates were redeemed and destroyed. In a few instances, Specimen certificates were made for a company but were never used because a different design was chosen by the company. These certificates are normally stamped "Specimen" or they have small holes spelling the word specimen. Most of the time they don't have a serial number, or they have a serial number of 00000. This is an exciting sector of the hobby that has grown in popularity over the past several years.