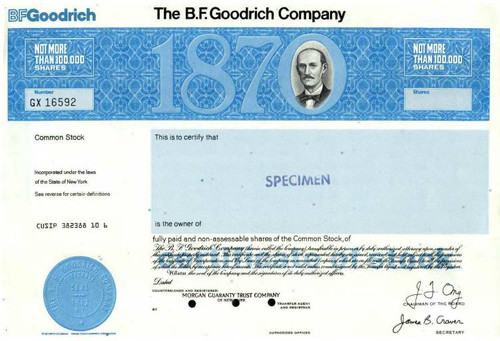 Beautifully engraved SPECIMEN certificate from the B.F. Goodrich Company. This historic document was printed by the Security Columbian Banknote Company and has an ornate top border with a vignette of the company company founder and the date of 1870 women. This item has the printed signatures of the Company's Chairman and Secretary. 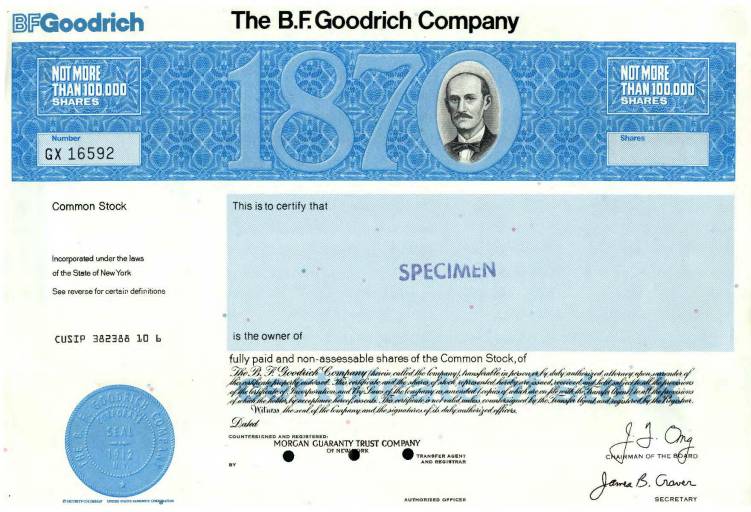 Certificate Vignette
The Goodrich Corporation, formerly the B.F. Goodrich Company, was an American aerospace manufacturing company based in Charlotte, North Carolina. Founded in Akron, Ohio in 1870 as Goodrich, Tew & Co. by Dr. Benjamin Franklin Goodrich. The company name was changed to the "B.F. Goodrich Company" in 1880, to BFGoodrich in the 1980s, and to "Goodrich Corporation" in 2001. In 1869 Benjamin Franklin Goodrich purchased the Hudson River Rubber Company, a small business in Hastings-on-Hudson, New York. The following year Goodrich accepted an offer of $13,600 from the citizens of Akron, Ohio, to relocate his business there. Goodrich ranked 67th among United States corporations in the value of World War II military production contracts. The company grew to be one of the largest tire and rubber manufacturers in the world, helped in part by the 1986 merger with Uniroyal (formerly the United States Rubber Company). This product line was sold to Michelin in 1988, and the company merged with Rohr (1997), Coltec Industries, and TRW Aeronautical Systems (formerly Lucas Aerospace) in 2002. The sale of the specialty chemicals division and subsequent change to the current name completed the transformation. In 2006, company sales were $5.8 billion, of which 18%, 16% and 12% of total revenues were accounted for by the U.S. government, Airbus and Boeing, respectively. Though BFGoodrich is a popular brand name of tires, the Goodrich Corporation exited the tire business in 1988. The tire business and use of the name was sold to Michelin. Before the sale to Michelin, Goodrich ran television and print ads showing an empty expanse of blue sky, to distinguish themselves from the similar-sounding Goodyear tire company. The tag line was, "See that blimp up in the sky? We're the other guys!" The company was also sometimes confused with Mr. Goodwrench as the two last names were very close and especially when B.F. Goodrich tires were featured on many General Motors cars and trucks. History from Wikipedia, Encyberpedia and OldCompany.com (old stock certificate research service) History from OldCompany.com and SavingsBonds.pro (collectible Savings Bonds website) About Specimen Certificates Specimen Certificates are actual certificates that have never been issued. They were usually kept by the printers in their permanent archives as their only example of a particular certificate. Sometimes you will see a hand stamp on the certificate that says "Do not remove from file". Specimens were also used to show prospective clients different types of certificate designs that were available. Specimen certificates are usually much scarcer than issued certificates. In fact, many times they are the only way to get a certificate for a particular company because the issued certificates were redeemed and destroyed. In a few instances, Specimen certificates were made for a company but were never used because a different design was chosen by the company. These certificates are normally stamped "Specimen" or they have small holes spelling the word specimen. Most of the time they don't have a serial number, or they have a serial number of 00000.