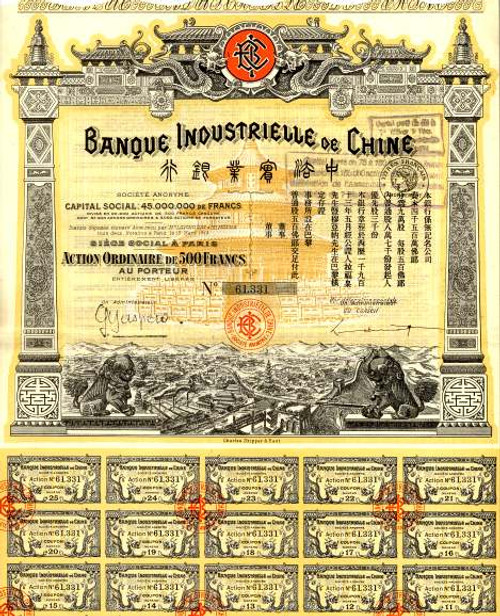 Beautifully printed certificate from the Banque Industrielle de Chine - China Industrial Bank issued in 1919. This historic document was printed by Charles Skipper and East and has an ornate border around it with a vignette of Chinese dragons and pagodas on top flanking the Company's logo and a vignette depicting the City of Shanghai at the bottom. Underprint of Forbidden City building at center. Light folds. A colorful item which is printed in both French and Chinese and has the signatures of the company's administrators. It has period cancellation markings and is over 100 years old. 17 ornate coupons attached at bottom. (Caution - We have seen several lithograph reproductions of this certificate for sale - Everything we sell at Scripophily.com is guaranteed authentic)

Bottom Vignette
The Banque Industrielle de Chine (Industrial Bank of China) was established under the laws of France in 1913. It conducted a general banking business with a strong interest in financing transactions with China. The company had branches in China, Siberia, Japan, Indo-China, Straits Settlements, United States, England, France and Belgium. Banque Industrielle de Chine closed down in 1921 after declaring bankruptcy. The company got a second life under Chairman Mao in 1949 as it became the first foreign bank allowed to do business in the People's Republic of China.