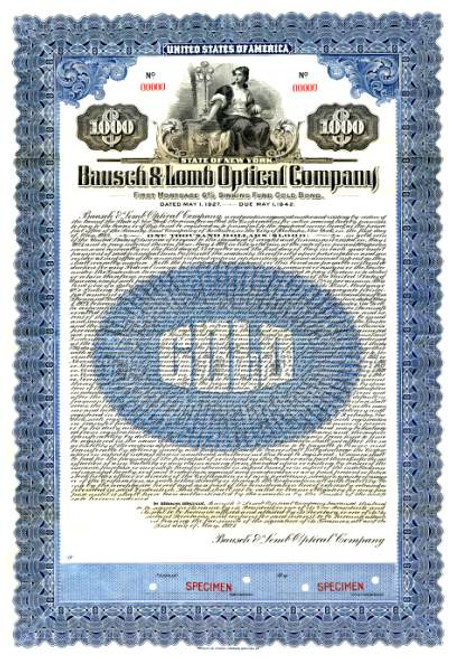 Beautifully engraved RARE SPECIMEN Gold Bond certificate from the Bausch & Lomb Optical Company. This historic document was printed by the American Banknote Company in 1927 and has an ornate border around it with a vignette of an allegorical woman. This item is over 90 years old and the first time we have seen this certificate. 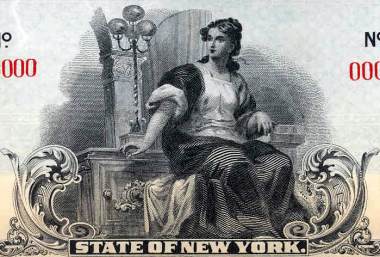 Certificate Vignette
The well-known optical company was founded by two German immigrants, John J. Bausch (1830-1926) and Henry Lomb (1828-1908). Although their association dates back to 1850, they did not formally establish a partnership until 1866. Beginning with the manufacture of hard rubber eyeglass frames, they gradually expanded their lines of production to include reading glasses and pocket microscopes. In 1874, they produced their first compound microscope, and the name of the business was changed to Bausch & Lomb Optical Company. By 1900, Bausch & Lomb had become the leading American manufacturer of microscopes (30,000), and the third largest in the world after Ernst Leitz and Carl Zeiss. Specimen Certificates are actual certificates that have never been issued. They were usually kept by the printers in their permanent archives as their only example of a particular certificate. Sometimes you will see a hand stamp on the certificate that says "Do not remove from file". Specimens were also used to show prospective clients different types of certificate designs that were available. Specimen certificates are usually much scarcer than issued certificates. In fact, many times they are the only way to get a certificate for a particular company because the issued certificates were redeemed and destroyed. In a few instances, Specimen certificates we made for a company but were never used because a different design was chosen by the company. These certificates are normally stamped "Specimen" or they have small holes spelling the word specimen. Most of the time they don't have a serial number, or they have a serial number of 00000. This is an exciting sector of the hobby that grown in popularity and realized nice appreciation in value over the past several years.