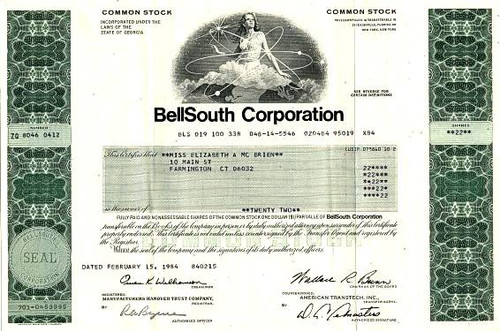 Beautiful uncancelled stock certificate from BellSouth Corporation issued in 1995. This historic document was printed by American Banknote Company and has an ornate border around it with a vignette of an allegorical woman in the company logo. This item has the signatures of the Company's Chairman and Treasurer and is over 28 years old. Light fold from original mailing. 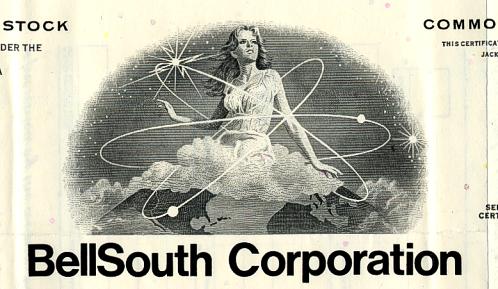 Certificate Vignette
BellSouth Corporation is an American telecommunications holding company based in Atlanta, Georgia. BellSouth was one of the seven original Regional Bell Operating Companies after the U.S. Department of Justice forced the American Telephone & Telegraph Company to divest itself of its regional telephone companies on January 1, 1984. In a merger announced on March 5, 2006 and executed on December 29, 2006, AT&T Inc. (originally Southwestern Bell) acquired BellSouth for approximately $86 billion (1.325 shares of AT&T for each share of BellSouth)[3] The combined company retained the name AT&T. The merger consolidated ownership of Cingular Wireless and YELLOWPAGES.COM, both of which were joint ventures between BellSouth and AT&T. With the merger completed, wireless services previously offered by Cingular Wireless are now offered under the AT&T name. In addition, BellSouth has formally become AT&T South, its Bell Operating Company doing business as AT&T Southeast, and ceased doing business under the BellSouth name on June 30, 2007. BellSouth was the last of the Regional Bell Operating Companies to keep its original corporate name after the 1984 AT&T breakup, as well as the last one to retain the Bell logo as part of its main corporate identity. BellSouth also operated in the Australian and New Zealand market. BellSouth operated in New Zealand under the name of BellSouth New Zealand Limited from 1993 until 1998 when it was acquired by Vodafone. It competed against Telecom New Zealand. Its operations in Australia were under the name of BellSouth Australia Pty Limited. History from Wikipedia and OldCompany.com (old stock certificate research service)