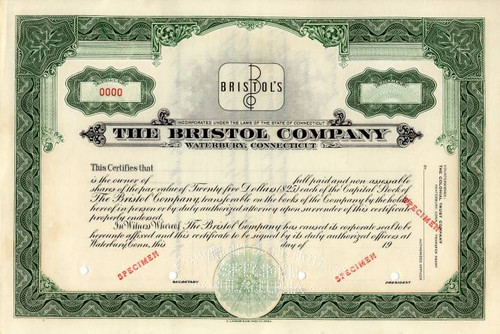 Beautiful specimen stock certificate from the Bristol Company. This historic document was printed by the E. A. Wright Bank Note Company of Philadelphia and has an ornate border around it with a vignette of their logo. 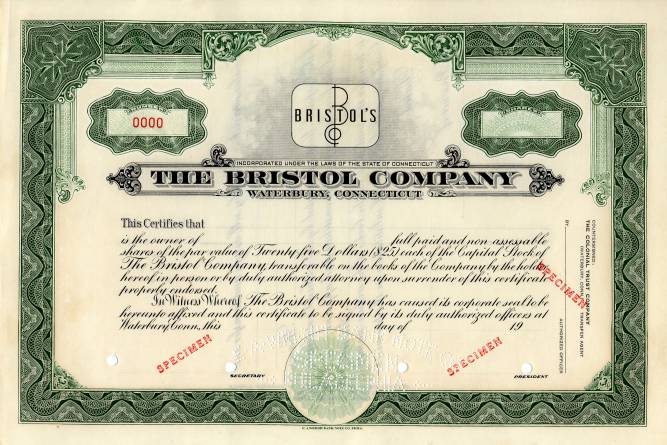 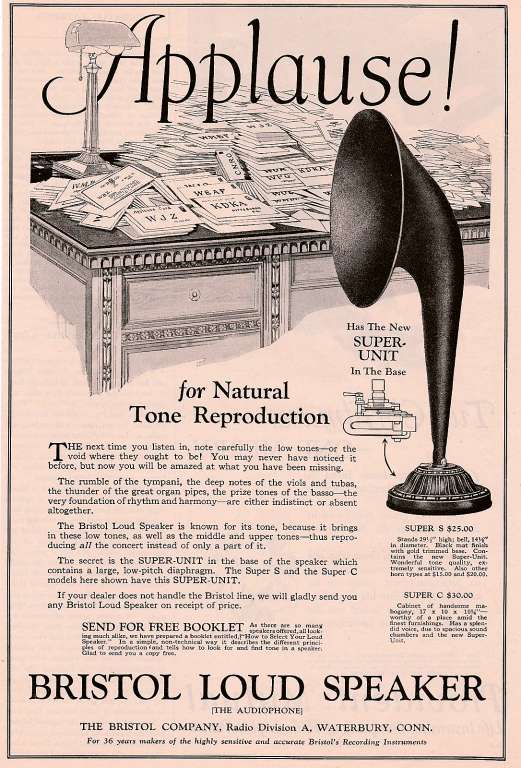 Bristol Company Radio Speaker Ad
The Bristol Manufacturing Company was established in 1889 in Naugatuck, Connecticut. Bristol pioneered the manufacture of recording products, including the circular chart recorder still used throughout industry today. In 1892, the company moved to Waterbury, Connecticut, where it remained for 95 years. Throughout the years, Bristol produced a wide variety of product lines, including radio equipment. William Henry Bristol, inventive genius, pioneering manufacturer, educator, and environmentalist, was born in Waterbury, Connecticut on July 5, 1859, the eldest of six children. After graduating from the Stevens Institute of Technology in 1884 with an engineering degree, he returned there in 1886 as an instructor and progressed to become a professor of mathematics in 1899. While at Stevens, he patented products including a steel lacing for industrial belts and a pressure chart recorder. The need to manufacture these products led to the founding of the Bristol Company in 1889 with his brother, Franklin, and his father, Benjamin. By 1915, the company was manufacturing the largest and most complete line of industrial instruments in the world, including instruments to measure and record temperature, electricity, pressure, motion, time, flow, and humidity. These instruments were the first to provide an uninterrupted history of manufacturing plant operations; increasing efficiency, improving quality, and allowing higher rates of productivity. He was awarded the John Scott Medal in 1890. Edward Longstreth Medal from the Franklin Institute in 1894.[1] In 1904, Professor Bristol invented the first practical pyrometer for measuring high temperatures. This created another new industry and led to the formation of the William H. Bristol Pyrometer Company in New York City. In 1915, he invented the "Bristolphone" to simultaneously record voices and other sounds with motion in moving pictures. He founded the William H. Bristol Talking Picture Corporation to develop "synchronized talking motion pictures," and produced one of the first full-length motion pictures with sound. The Bristolphone was used in nearly one hundred movie houses in the U.S. He also developed and manufactured loud speakers, power amplifiers, radios and phonograph recorders. His "Audiophone," which was used at Yankee Stadium and Grand Central Station in New York, revolutionized public address systems. William Bristol was awarded medals at expositions in Chicago (1893), Paris (1900), Saint Louis (1904), San Francisco (1915) and Philadelphia (1926). He received two awards from the Franklin Institute to honor his distinguished career. He gained worldwide recognition while making possible major advances in both pure scientific knowledge and industrial technology. Bristol, who received nearly 100 patents during his lifetime, died on June 18, 1930. History from OldCompany.com and SavingsBonds.pro (collectible Savings Bonds website) About Specimen Certificates Specimen Certificates are actual certificates that have never been issued. They were usually kept by the printers in their permanent archives as their only example of a particular certificate. Sometimes you will see a hand stamp on the certificate that says "Do not remove from file". Specimens were also used to show prospective clients different types of certificate designs that were available. Specimen certificates are usually much scarcer than issued certificates. In fact, many times they are the only way to get a certificate for a particular company because the issued certificates were redeemed and destroyed. In a few instances, Specimen certificates were made for a company but were never used because a different design was chosen by the company. These certificates are normally stamped "Specimen" or they have small holes spelling the word specimen. Most of the time they don't have a serial number, or they have a serial number of 00000.