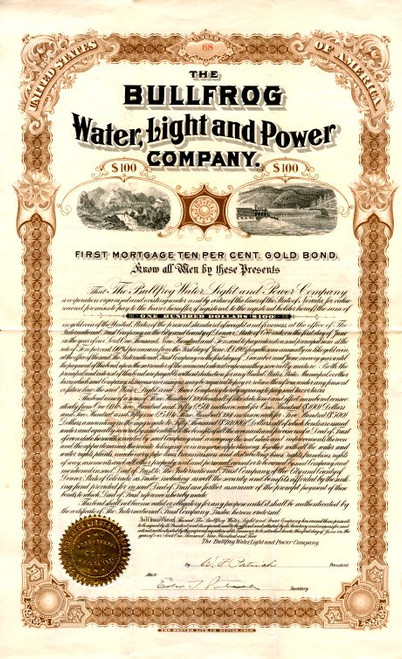 Beautifully Gold Bond certificate from the Bullfrog Water, Light and Power Company issued in 1905. This historic document has an ornate border around it with a vignettes of a mountain scene and a dam. This item has the signatures of the Company's President, W.F. Patrick and Secretary. 6 uncancelled coupons attached on the right (not shown in scan) 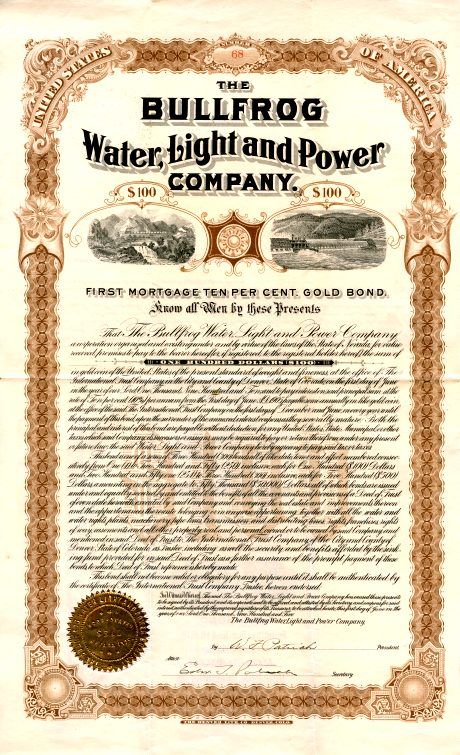 Certificate
The Bullfrog Water, Light and Power Company supplied water and electricity to the towns of Bullfrog, Beatty and Gold Center, and to the City of Rhyolite. Bullfrog Mine was discovered by Frank "Shorty" Harris and Eddie Cross on August 9, 1904. Bullfrog is a ghost town in Nye County, in the U.S. state of Nevada. The name Bullfrog was chosen either because Eddie Cross was fond of singing 'O, the bulldog on the bank and the bullfrog in the pool...' or because the ore sample of rich gold was found in green-stained rock and was frog-shaped. It is probable Original was added to the name of the mine to distinguish it from the mining camp. By the winter of 1904, Bullfrog had about a thousand people living in tents, dugouts and congested traffic made a demand for rail connections The Bullfrog-Goldfield Railroad reached Rhyolite on May 22, 1907 W. F.. Patrick, one of the main financiers at Goldfield and one of the founders of Rhyolite. He and his brother not only controlled the water, light and power going to Rhyolite, but they also owned extensive mine interests, including the Bullfrog National Bank Mine on Ladd Mountain. History from Wikipedia and OldCompany.com (old stock certificate research service)