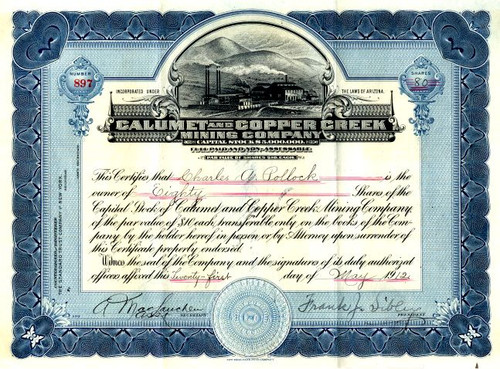 Beautiful certificate from the Calumet and Copper Creek Mining Company issued in 1912. This historic document was printed by the New York Banknote Company and has an ornate border around it with a vignette of a mining facility in a valley. This item has been hand signed by the Company's President, Frank J. Sibley and Assistant Secretary, A. MacLauchlin and is over 100 years old. 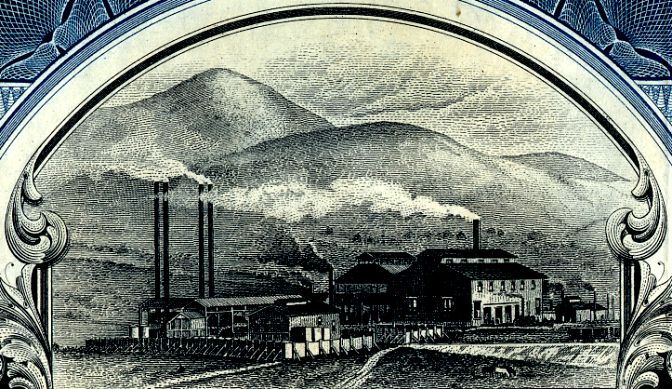 Certificate Vignette
In 1903, Frank and his brother R. R. Sibley organized the Copper Creek Mining Company to develop some claims located in the Copper Creek area in the 1880's. At the time, the area was quite remote, and little work was done until 1905 when completion of the Arizona Eastern Railroad from Phoenix to Winkelman reduced the haul distance from 70 miles to 35. At that time, this railroad company and two others planned to construct a line down the San Pedro Valley that would have reduced the haul distance to only 12 miles. Word of these plans sparked action by the Copper Creek Mining Co. and other property owners in the area who began developing their claims. Copper Creek MC began ore shipments in October 1905, but ceased the first of the following year and put its efforts into the construction of an elaborate concentration works and smelter at the mine. The Sibleys continued development of their other properties until 1908 when stock manipulation of a questionable character commenced. History from Encyberpedia and OldCompany.com (old stock certificate research service)