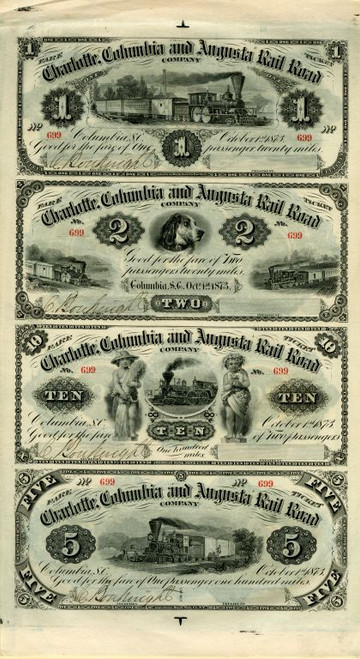 Beautifully engraved RARE uncut Fare Ticket Sheet from the Charlotte, Columbia, Augusta Rail Road issued in 1873. This historic document was printed by the American Banknote Company and has unused fare tickets in the denominations of $1, $2, $5, and $10. This item has the signature of the Company's Secretary, Caleb Bouknight. 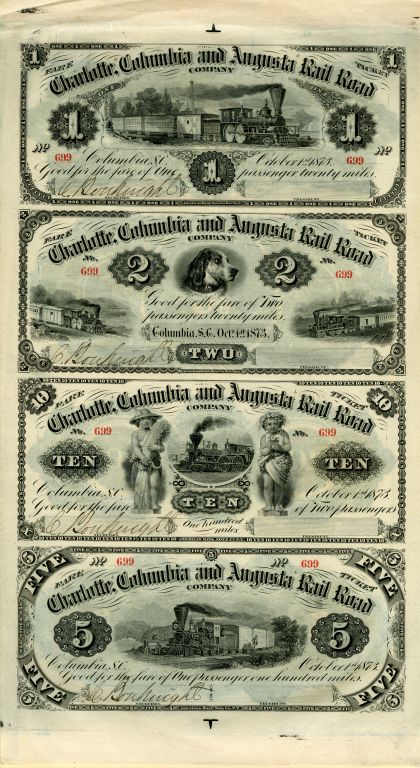 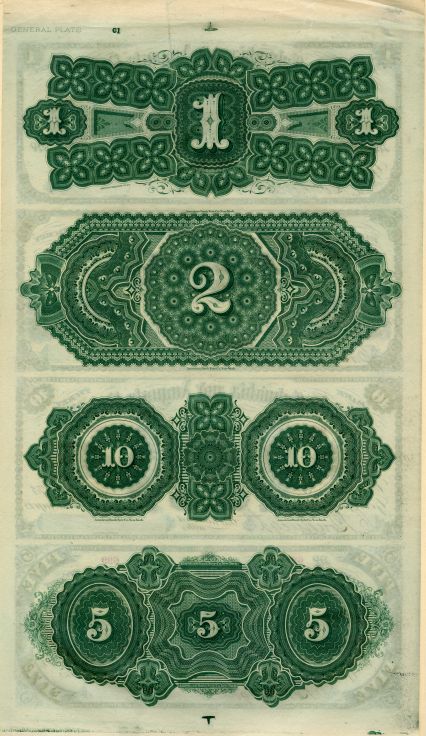 Back
The Charlotte, Columbia and Augusta Railroad was formed in 1869 with the merger of the Charlotte and South Carolina Railroad and the Columbia and Augusta Railroad. The combined line stretched for over 190 miles (310 km) between Charlotte, North Carolina, and Augusta, Georgia. The railroad was acquired by the Richmond and Danville Railroad in 1878 and officially merged into the Richmond & Danville in 1882. The latter went into receivership in 1892 and the Charlotte, Columbia and Augusta was foreclosed in the following year.[4] It was sold to Southern Railway on July 10, 1894.[4] After the acquisition in 1894, the Charlotte, Columbia and Augusta name was dropped and the Southern moniker was used. Tickets The Charlotte, Columbia and Augusta Railroad printed fare tickets in $1, $2, $5 and $10 denominations that resembled US currency with the vignette of a steam locomotive on the front. The $1 fare ticket was good for one person for 20 miles. The $2 fare was good for two people 20 miles. The $5 fare was good for one person 100 miles and the $10 fare was good for two people 100 miles. Many businesses along the railroad would accept the railroad fare notes as currency for goods. Biography of Caleb M. Bouknight - http://www.csa-railroads.com/Essays/Biography_of_Caleb_M._Bouknight.htm Caleb M. Bouknight was born May 16, 1816 in South Carolina and died April 22, 1892. He was married to Julia Ann Rebecca Meetze and they had at least 6 children. The family lived in Columbia, S. C. at the 1860 census, where he is shown to be a Railroad Agent and to have real property of $5,000 and personal property of $6,000. The next lot in the census is the Charlotte & South Carolina RR and within one block of him live 5 more railroad employees. The Charlotte & South Carolina RR and receipts for government payments to the Railroad show him to have been the Treasurer of the Railroad throughout the war -- despite his Government position as Transportation Agent for at least a year. Bouknight was appointed Transportation Agent at Columbia, S. C. in December, 1861 by Major Ashe, Chief of Railroad Transportation. At the end of March, 1862, he was paid by the Assistant Quartermaster General, in Richmond, with the notation that he worked under Major Ashe. There is no surviving voucher for his service from March 31 to June 10, at which time he begins to be paid by the senior Quartermaster in Columbia, Major Roland Rhett. The last surviving pay voucher runs through November, 1862. The next known voucher for a Transportation Agent in Columbia is for a different man, starting July 1, 1863. Bouknight had been with the Charlotte & South Carolina RR from its inception (about 1850) and remained with it, in various positions, as it changed form several times, until at least 1880. He was Superintendent from 1867 to at least 1869, and when the Richmond & Danville RR bought out the Charlotte, Columbia & Augusta RR, in 1878, he became the Secretary of the new road. His life from 1869 to death is very sketchily known and no obituary has been located. History from Wikipedia and OldCompany.com (old stock certificate research service)