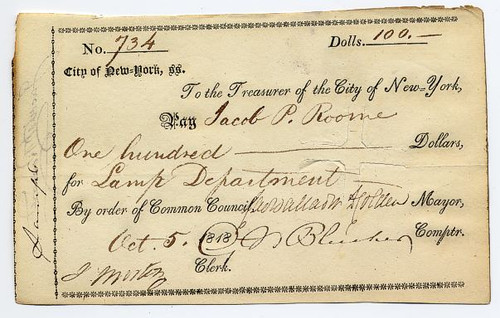 Historic document from the City of New York issued in 1818. Handsigned by New York Mayor, Cadwallader D. Colden 18181821 Federalist This item is over 191 years old. Cadwallader David Colden (April 4, 1769 Springhill, near Flushing, Queens County, New York - February 7, 1834 Jersey City, Hudson County, New Jersey) was an American politician. He was the grandson of Colonial leader Cadwallader Colden. He was taught by a private tutor, and then provided a classical education in Jamaica, New York and in London. After returning to the United States in 1785, he studied law, and was admitted to the bar in 1791. He first practiced law in New York City, moved to Poughkeepsie, New York in 1793, and then returned to New York in 1796. He was appointed district attorney in 1798 and 1810. He became a Colonel of Volunteers in the War of 1812. He was a member of the New York State Assembly in 1818, and Mayor of New York from 1818 to 1821. He successfully contested the election of Peter Sharpe to the Seventeenth United States Congress and served from December 12, 1821 to March 3, 1823. He was a member of the New York State Senate from the 1st District from 1825 to 1827, when he resigned. After his resignation from the State Senate, he moved to Jersey City where he devoted much of his time to the completion of the Morris Canal.