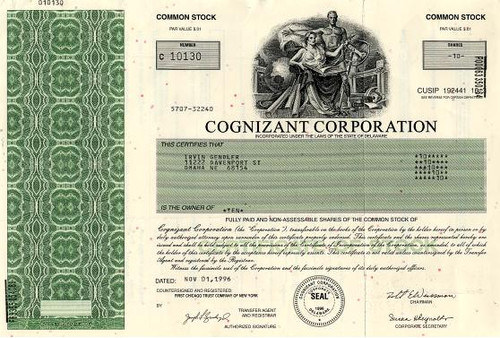 Beautiful certificate from the Cognizant Corporation issued in 1996. This historic document was printed by Banknote Corporation of America and has an ornate border around it with a vignette of an allegorical man and woman. This item has the signatures of the Company's Chairman and Secretary and is over 12 years old. 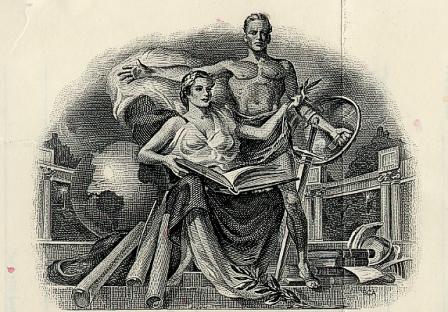 Certificate Vignette
Cognizant Technology Solutions is an information technology services company with headquarters in New Jersey U.S.A. and with significant operations in Chennai, India. Cognizant has been named to the 2007 Fortune 100 Fastest-Growing Companies List for the fifth consecutive year, making it the only company receiving the "Five-year all-stars" distinction in 2007's list. This feat is unmatched by any company. Cognizant has also been named in the top 10 of Business Week's Hot Growth Technology Companies. Cognizant was ranked 6th overall.It was the #1 ranked IT services Company in the list. Cognizant started in 1994, as Dun & Bradstreet Satyam Software - the in-house technology development center for the Dun & Bradstreet Corporation (D&B) and its operating units. Initially a joint venture between Dun & Bradstreet (76%) and Satyam Computer Services Ltd. (24%), it soon became a 100% subsidiary of D&B Corp. In 1996, the company became a division of the Cognizant Corporation, after the split-up of Dun & Bradstreet Corporation. In June 1998, Cognizant Corporation was again split into independent companies, and Cognizant Technology Solutions was formed as a division of IMS Health, a provider of information solutions to the pharmaceutical and healthcare industries. The same year, the company completed its initial public offering and was listed on the NASDAQ. In November 2002, IMS Health divested its majority interest in Cognizant through a tax-free split-off.' Although it is headquartered in New Jersey, USA, most of Cognizant Technology Solutions' employees are based in the city of Chennai, India. It also has offices in Bangalore, Coimbatore, Hyderabad, Kolkata, Mumbai, Pune and Cochin and development centrea in Shanghai, China and Amsterdam. Cognizant has over 55,000 employees. It became the first company in the world to be certified for CMMI-Level5 per the latest model. History from Wikipedia and OldCompanyResearch.com (old stock certificate research service).