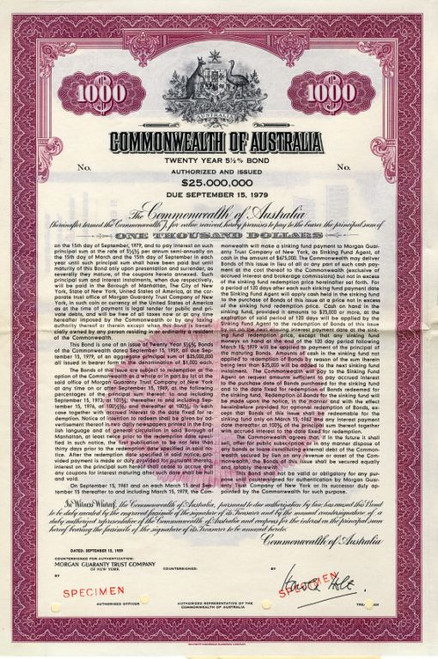 Beautifully engraved $1000 Specimen Bond Certificate from the Commonwealth of Australia printed in 1959. This historic document was printed by the American Banknote Company and has an ornate border around it with a vignette of the Australian coat of arms, a kangaroo to the left and an emu to the right. This item has the printed signature of the Treasurer. 40 coupons attached on right side. 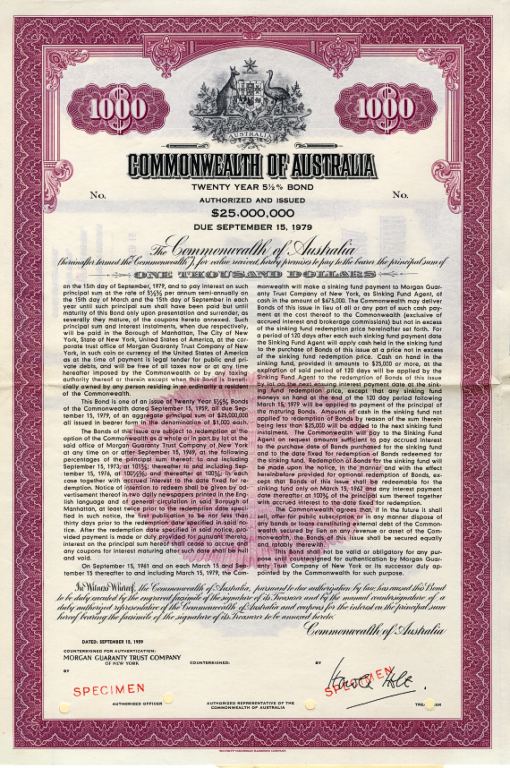 Certificate
Australia, officially the Commonwealth of Australia, is a sovereign country comprising the mainland of the Australian continent, the island of Tasmania and numerous smaller islands. It is the largest country in Oceania and the world's sixth-largest country by total area. The neighboring countries are Papua New Guinea, Indonesia and East Timor to the north; the Solomon Islands and Vanuatu to the north-east; and New Zealand to the south-east. Australia's capital is Canberra, and its largest urban area is Sydney. For about 50,000 years before the first British settlement in the late 18th century, Australia was inhabited by indigenous Australians, who spoke languages classifiable into roughly 250 groups. After the European discovery of the continent by Dutch explorers in 1606, Australia's eastern half was claimed by Great Britain in 1770 and initially settled through penal transportation to the colony of New South Wales from 26 January 1788. The population grew steadily in subsequent decades, and by the 1850s most of the continent had been explored and an additional five self-governing crown colonies established. On 1 January 1901, the six colonies federated, forming the Commonwealth of Australia. Australia has since maintained a stable liberal democratic political system that functions as a federal parliamentary constitutional monarchy comprising six states and several territories. Australia has the world's 13th-largest economy and ninth-highest per capita income (IMF). With the second-highest human development index globally, the country ranks highly in quality of life, health, education, economic freedom, and civil liberties and political rights. Australia is a member of the United Nations, G20, Commonwealth of Nations, ANZUS, Organisation for Economic Co-operation and Development (OECD), World Trade Organization, Asia-Pacific Economic Cooperation, and the Pacific Islands Forum. The population of 25 million[5] is highly urbanised and heavily concentrated on the eastern seaboard. Australia had the world's 9th largest immigrant population, with immigrants accounting for 26% of the population. History from Wikipedia and OldCompany.com (old stock certificate research service) About Specimen Certificates Specimen Certificates are actual certificates that have never been issued. They were usually kept by the printers in their permanent archives as their only example of a particular certificate. Sometimes you will see a hand stamp on the certificate that says "Do not remove from file". Specimens were also used to show prospective clients different types of certificate designs that were available. Specimen certificates are usually much scarcer than issued certificates. In fact, many times they are the only way to get a certificate for a particular company because the issued certificates were redeemed and destroyed. In a few instances, Specimen certificates were made for a company but were never used because a different design was chosen by the company. These certificates are normally stamped "Specimen" or they have small holes spelling the word specimen. Most of the time they don't have a serial number, or they have a serial number of 00000. This is an exciting sector of the hobby that has grown in popularity over the past several years.