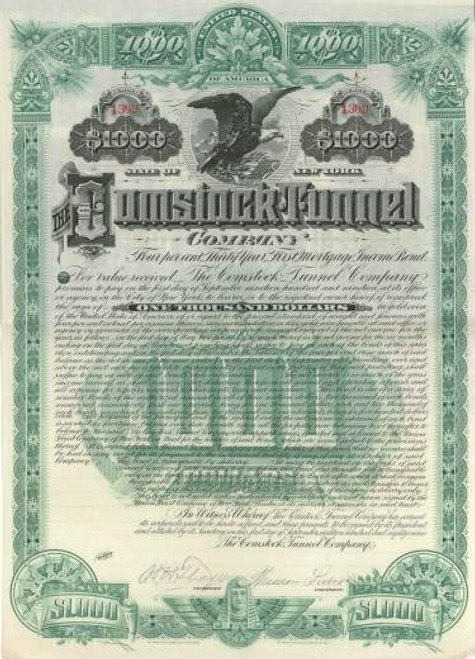 Beautifully engraved bond certificate from the <font color="#0000FF">Comstock Tunnel Company </font>issued in 1889. This historic document was printed by the Homer Lee Banknote Company and has an ornate border around it with a vignette of an eagle. This item is hand signed by the Company’s President ( Theodore Sutro ) and Secretary and is over 122 years old.

The Sutro Tunnel Company was organized by Adolph Sutro for the purpose of constructing a drainage tunnel under the Comstock Lode in Virginia City, Nevada. Sutro's initial associates in this enterprise were William M. Stewart, D.E. Avery, Louis Janin, Jr., and H.K. Mitchell. On February 4, 1865 the Nevada legislature granted the company an exclusive franchise to construct a drainage tunnel beginning in the foothills of the Carson River Valley in Lyon County, and terminating in the Comstock Lode of Virginia City. The Sutro Tunnel Company was also given a charter to sink mining shafts along the line as long as they did not infringe upon the rights of miners with previous claims.

The U.S. Congress granted the Sutro Tunnel Company an exclusive charter on July 25, 1866. The charter gave Sutro the right to purchase public land at $1.25 per acre to use for construction of the tunnel, and $5.00 per acre for land within 2,000' of the tunnel which contained mineral veins and lodes. It also specified that all persons, companies or corporations owning claims benefitted by the tunnel would be required to contribute to the costs of its operation.

Sutro encountered considerable difficulty in raising the capital necessary for construction. The sale of stock in the Sutro Tunnel Company enabled construction to begin in 1869 but he was eventually forced to turn to England where, begining in 1872, he obtained major financing from the banking house of McCalmont Brothers and Company. The tunnel connected with the Savage Mine in 1878. Contracts which helped pay for lateral tunnels were signed with twenty-four mining companies in April of the following year. Two months later the tunnel project was completed, and by 1880 Sutro had sold his stock in the company.

The tunnel was in use for fifty years and was a success as a means of draining hot water from the mines. Financially it was a loss, as stock became worthless with the decline of Comstock Lode.

The mortgage holders, McCalmont Brothers & Co., sued to foreclose, showing an amount due in principal and interest of $2,023,833 of which they are said to have received, on a compromise, $1,000,000 when the properly was sold on foreclosure in 1889. With the exception of this amount, no part of the cost of the tunnel was ever repaid. Many of the old stockholders formed a new company called the Comstock Tunnel Company and took over the property. T. Sutro became the President.