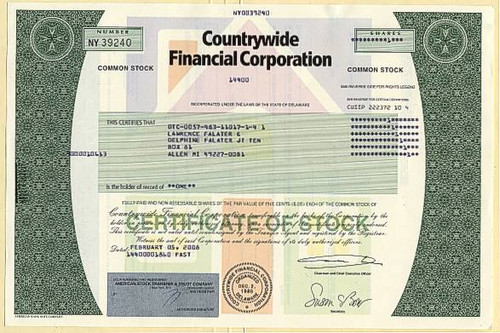 Beautiful certificate from the Countrywide Financial Corporation. This historic document was printed by the American Banknote Company and has an ornate border around it with a vignette of the Company's name. This item has the printed signatures of the Company's Chairman, Angelo Mozilo.

Certificate Vignette
Countrywide was founded in 1969 by David S. Loeb and Angelo Mozilo. Loeb died in 2003. The initial public offering was less than successful, with company stock trading over the counter at less than $1 per share. In 1985 Countrywide stock was re-listed on the New York Stock Exchange under the ticker symbol CFC. Countrywide's stock has been described as the "23,000% stock" by Fortune magazine. Between 1982 and 2003, Countrywide delivered investors a 23,000.0% return, exceeding the returns of Washington Mutual, Wal-Mart, and Warren Buffett's Berkshire Hathaway. In September 2007, after months of negative publicity and the announcement of a reduction of 20% of its workforce, Countrywide launched a public relations campaign aimed at demoralized employees. Employees were expected to sign a pledge to "demonstrate their commitment to our efforts" and "to tell the Countrywide story to all". Those who signed the pledge received a green rubber Protect Our House wristband. The endgame in Bank of America's $4 billion takeover of Countrywide Financial began with a December phone call from Countrywide Chief Executive Angelo Mozilo to his Bank of America counterpart, Kenneth D. Lewis. And on January 11, 2008, Bank of America announced it had agreed to buy Countrywide for $4 billion in an all-stock transaction. The stock's value settled at about $5 1/2 per share following the announcement; it had been as low as $4.43 before the Bank of America deal was announced. After more than six months of financial deterioration at Countrywide--despite a $2 billion infusion of cash from Bank of America in August--Mozilo said he was ready to throw in the towel, according to Lewis. At the same time, having watched Countrywide dramatically retool its operations in a bid to survive, Bank of America executives began to believe Countrywide's big U.S. mortgage business might be worth having. "The ability to get that kind of size and scale became more appealing as we saw the business model change to a model we could accept," Lewis said. "We considered the lawsuits, the negative publicity that Countrywide had. We weighed the short-term pain versus what we think will be a very good deal for our shareholders." Bank of America deployed 60 analysts from its headquarters in Charlotte, N.C., to Countrywide's headquarters in Calabasas, Calif. After four weeks analyzing Countrywide's legal and financial predicament, and modeling how its loan portfolio was likely to perform, Bank of America offered an all-stock deal valued at $4 billion for Countrywide--a fraction of the company's $24 billion market value a year ago. Countrywide shareholders approved the deal on June 25, 2008 and it closed July 2, 2008. Bank of America announced on June 26, 2008 that the takeover of Countrywide Financial Corp. will result in the loss of 7,500 jobs over the next two years. The deal is a landmark in the housing crisis, given Countrywide's prominence as the nation's largest mortgage lender, at least until recently. On June 4, 2009, the U.S. Securities and Exchange Commission charged former CEO Angelo Mozilo with insider trading and securities fraud, and former COO David Sambol and former CFO Eric Sieracki with securities fraud for failing to disclose Countrywide's lax lending standards in Countrywide's 2006 annual report. On January 11, 2008, Bank of America announced that it planned to purchase Countrywide Financial for $4.1 billion in stock. On June 5, 2008, Bank of America Corporation announced it had received approval from the Board of Governors of the Federal Reserve System to purchase Countrywide Financial Corporation. Then, on June 25, 2008, Countrywide announced it had received the approval of 69% of its shareholders to planned merger with Bank of America. On July 1, 2008, Bank of America Corporation completed its purchase of Countrywide Financial Corporation. History from Wikipedia and OldCompany.com (old stock certificate research service).