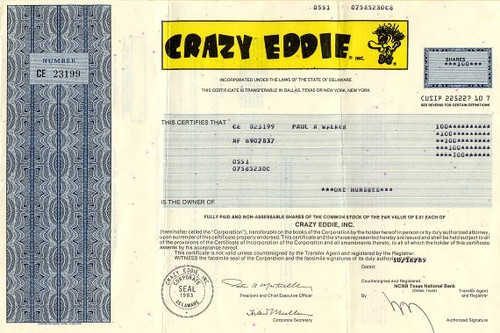 Beautiful uncancelled scarce certificate from the Crazy Eddie Inc issued in 1989. This historic document was printed by American Banknote Company and has an ornate border around it with a vignette of the Crazy Eddie Logo. This item has the signatures of the Company's President and Secretary and is over 30 years old.

Certificate Vignette
Crazy Eddie was an electronics chain which was primarily located in the Northeastern United States. It was started in 1970's in Brooklyn, New York by businessman Eddie Antar. In television and radio commercials, actor Jerry Carroll portrayed the hyperactive Crazy Eddie proclaiming "Crazy Eddie will beat any price you find" and "Crazy Eddie His Prices Are Insaaane!". In 1989 the Crazy Eddie chain suffered a major scandal when Eddie Antar and his family were accused and eventually convicted of skimming money and cooking the books and inflating inventory. Antar fled to Israel where he lived until 1994 when he was extradited back to the United States.