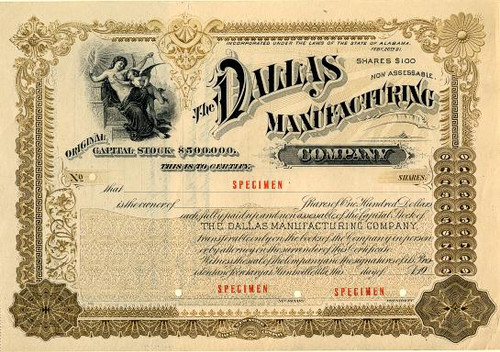 Beautiful engraved RARE Specimen Certificate from the Dallas Manufacturing Company printed around 1900. This historic document was printed by New York Bank Note Company and has an ornate border around it with a vignette of an allegorical woman and child. 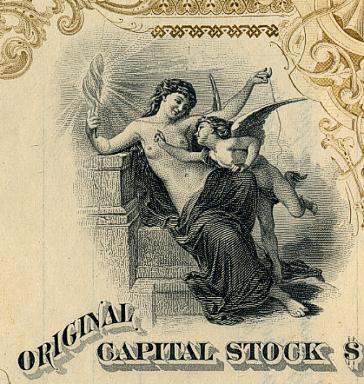 Certificate Vignette
The Dallas Mill was built by the Dallas Manufacturing Company. The company was headed by Captain T.B. Dallas, who was originally from Nashville, Tennessee. Dallas Mills was a manufacturer of cotton sheeting. The company was chartered in 1891 by T.B. Dallas, and began operation in 1892 as Alabama's largest cotton mill which made sheeting. In 1891, the company was located in Huntsville, Alabama. At the time Huntsville's population was 1,327 citizens. The mill village extended from Oakwood Avenue, South to O'Shaughnessy Avenue, and West to Dallas Avenue. Employees were provided homes, medical care, churches, library, lodge building, YMCA, concerts, a kindergarten, and schools. It was an impressive and imposing looking building -- the length of two football fields! In its heyday, 59,000 spindles hummed and 1,500 looms were operated by over 1,000 employees, most of whom lived in the adjacent village planned and built by Dallas Manufacturing. The mill closed in 1949. Dallas Village was incorporated into Huntsville six years later in 1955. Genesco Shoe Company then used the mill building for a distribution operation until 1985. After that the mill was vacant till the building was destroyed by a fire on July 24, 1991 that lasted three days. History from Wikipedia and OldCompanyResearch.com (old stock certificate research service). About Specimens Specimen Certificates are actual certificates that have never been issued. They were usually kept by the printers in their permanent archives as their only example of a particular certificate. Sometimes you will see a hand stamp on the certificate that says "Do not remove from file". Specimens were also used to show prospective clients different types of certificate designs that were available. Specimen certificates are usually much scarcer than issued certificates. In fact, many times they are the only way to get a certificate for a particular company because the issued certificates were redeemed and destroyed. In a few instances, Specimen certificates we made for a company but were never used because a different design was chosen by the company. These certificates are normally stamped "Specimen" or they have small holes spelling the word specimen. Most of the time they don't have a serial number, or they have a serial number of 00000. This is an exciting sector of the hobby that grown in popularity over the past several years.