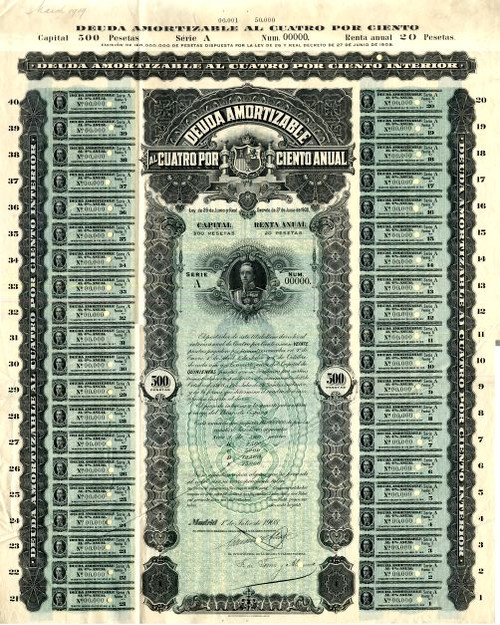 Beautifully engraved Deuda Amortizable Al Cuatro Por Ciento Interior Specimen certificate from Madrid, Spain printed in 1908. This historic document was printed by the Bradbury Wilkonson Company and has an ornate border around it with a vignette of Spain's Coat of Arms and Alfonso XIII King of Spain. This item has the printed signatures of officials and is over 99 years old. large format bond with 20 coupons attached on each side. 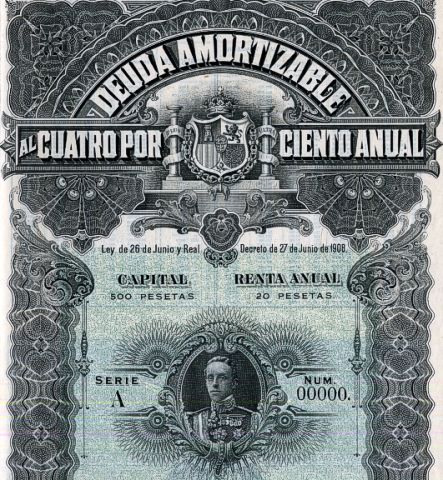 Certificate Vignette
Alfonso XIII of Spain (May 17, 1886 February 28, 1941), King of Spain, posthumous son of Alfonso XII of Spain, was proclaimed King at his birth. He reigned from 1886-1931. His mother, Queen Maria Christina of Austria, was appointed regent during his minority. In 1902, on attaining his 16th year, the King assumed control of the government. The growth of the young monarch can be seen in his portraits on Spain's periodically issued peseta coins. On May 31, 1906 he married Scottish-born Princess Victoria Eugenie of Battenberg (1887-1969), a niece of King Edward VII of the United Kingdom and a granddaughter of Queen Victoria of the United Kingdom. A Serene Highness by birth, Ena, as she was known, was raised to Royal Highness status a month before her wedding to prevent the union from being viewed as unequal. As Alfonso XIII and Queen Ena were returning from the wedding they narrowly escaped the assassination attempted by the anarchist Mateu Morral; instead, the bomb explosion killed or injured many bystanders and members of the royal procession. The royal couple had seven children: About Specimen Certificates Specimen Certificates are actual certificates that have never been issued. They were usually kept by the printers in their permanent archives as their only example of a particular certificate. Sometimes you will see a hand stamp on the certificate that says "Do not remove from file". Specimens were also used to show prospective clients different types of certificate designs that were available. Specimen certificates are usually much scarcer than issued certificates. In fact, many times they are the only way to get a certificate for a particular company because the issued certificates were redeemed and destroyed. In a few instances, Specimen certificates were made for a company but were never used because a different design was chosen by the company. These certificates are normally stamped "Specimen" or they have small holes spelling the word specimen. Most of the time they don't have a serial number, or they have a serial number of 00000. This is an exciting sector of the hobby that has grown in popularity over the past several years.