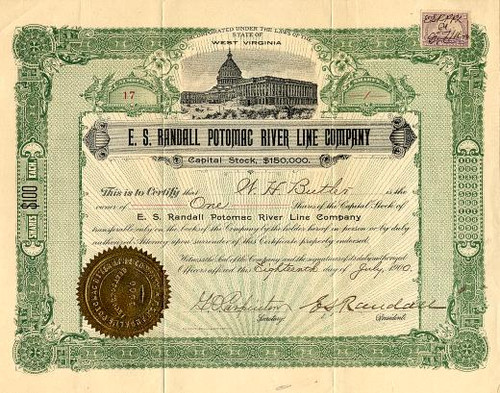 Beautiful certificate from the E.S. Randall Potomac River Line Company issued in 1900. This historic document has an ornate border around it with a vignette of the capitol. This item has the signatures of the Company's President, E.S. Randall and Secretary and is over 106 years old.

Certificate Vignette
The E.S. Randall Potomac River Line Company operated steamers on the Potomac River. One of the largest and most magnificent Steamer was the Estelle Randall, named after the company's founder. The 112 foot long vessel was built in 1898 at Baltimore by William E. Woodall and Company. Its machinery was furnished by the Campbell and Zell Company. In 1909, the steamer had been bought by the Farmers' and Merchants' Line of North Carolina and was then overhauled in Norfolk for use in the Albemarle region. Soon after, on January 18, 1910, the Estelle Randall was consumed by the fire of unknown origin and was a total loss. The Estelle Randall made stops at towns along the Albemarle Sound on its run between Elizabeth City and Norfolk, Virginia. During one of these stops at the town of Columbia in Tyrrell County, the Estelle Randall burned and sank while tied to the wharf. The ship's cook died, but the remaining fourteen crew members narrowly escaped the late evening fire.