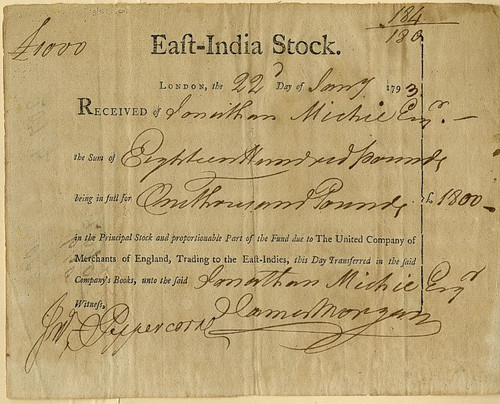 Beautiful stock certificate from the <font color="#0000FF">East India Company </font> issued in 1793. This item has the signatures of the Company’s President and Secretary, and is over 220 years old.  The certificate was issued to Jonathan Michie Esq and is signed by James Morgan and J. Peppercorn. 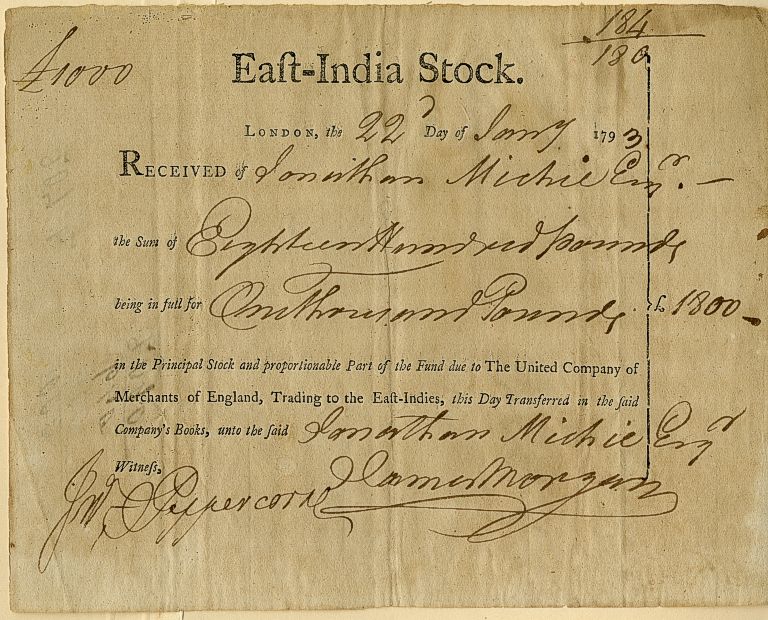 The East India Company was an English, and later British, joint-stock company founded in 1600. It was formed to trade in the Indian Ocean region, initially with the East Indies (the Indian subcontinent and Southeast Asia), and later with East Asia. The company seized control of large parts of the Indian subcontinent, colonised parts of Southeast Asia and Hong Kong, and kept trading posts and colonies in the Persian Gulf Residencies. At its peak, the company was the largest corporation in the world, competing with the Dutch East India Company.

The company even had its own armed forces in the form of the company's three Presidency armies, totalling about 260,000 soldiers, twice the size of the army of Britain.  The operations of the company had a profound effect on the global balance of trade, almost single-handedly reversing the trend of eastward drain of Western bullion, seen since the Roman times.[9] Originally chartered as the "Governor and Company of Merchants of London Trading into the East-Indies", the company rose to account for half of the world's trade during the mid-1700s and early 1800s, particularly in basic commodities including cotton, silk, indigo dye, sugar, salt, spices, saltpetre, tea, and opium. The company also ruled the beginnings of the British Empire in India.

The company eventually came to rule large areas of India, exercising military power and assuming administrative functions. Company rule in India effectively began in 1757 after the Battle of Plassey and lasted until 1858 when, following the Indian Rebellion of 1857, the Government of India Act 1858 led to the British Crown assuming direct control of India in the form of the new British Raj. Despite frequent government intervention, the company had recurring problems with its finances. The company was dissolved in 1874 as a result of the East India Stock Dividend Redemption Act enacted one year earlier, as the Government of India Act had by then rendered it vestigial, powerless, and obsolete. The official government machinery of the British Raj had assumed its governmental functions and absorbed its armies.