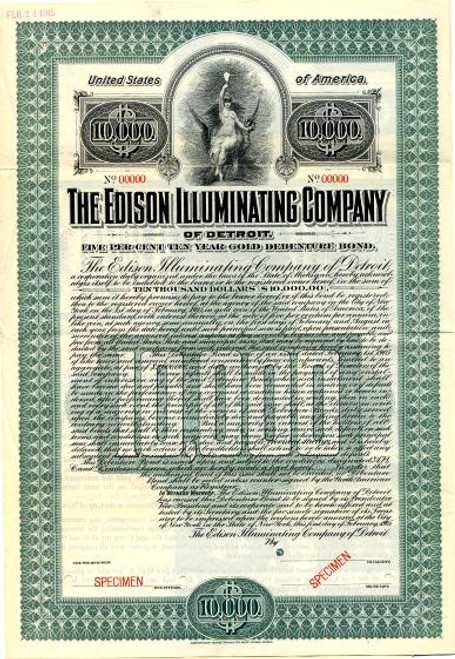 Beautifully engraved RARE SPECIMEN certificate from the Edison Illuminating Company of Detroit. This historic $10,000 Gold Bond was printed by the American Banknote Company in 1905 and has an ornate border around it with a vignette of an bare breasted maiden holding up an electric light bulb. This is the first time we have seen this certificate. 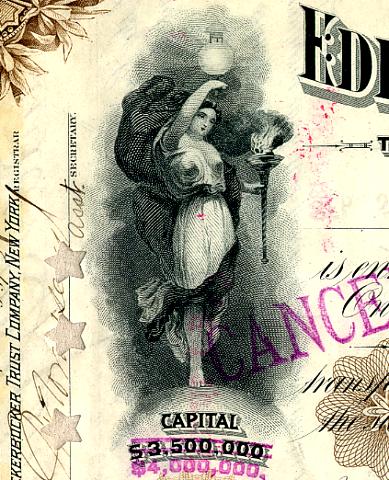 Certificate Vignette
In 1883, the incandescent light bulb made its first Detroit appearance at Metcalf Brothers dry goods store. Although no one knew it at the time, Thomas Edison's newest invention formed the foundation of the Detroit Edison Company. Not long after that first light bulb burned out, merchants in the city's central business district started demanding light bulbs of their own. In 1886, the Edison Illuminating Company of Detroit was established and served its first customers. Seven years later, Edison Illuminating and other electric companies in and around Detroit consolidated which later formed the Detroit Edison Company. Within three years, the company built 15,000 kilowatts of generating capacity - more than six times its original capacity. Rapid growth continued over the next two decades with the burgeoning automotive industry fueling much of Detroit Edison's early success.