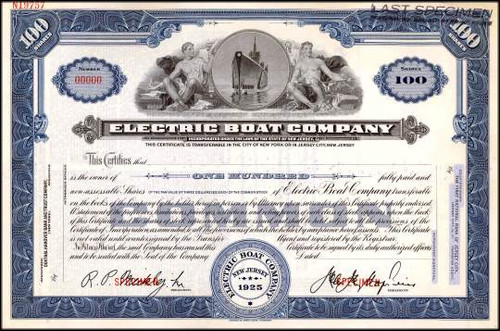 Beautifully engraved RARE SPECIMEN certificate from the Electric Boat Company. This historic document was printed by the American Banknote Company in 1951 and has an ornate border around it with a vignette of a submarine between allegorical men. This item has the printed signatures of the Company's President and Secretary. The Electric Boat Company changed its name to General Dynamics in 1952.

Certificate Vignette
The Electric Boat Company is a subsidiary of General Dynamics. It currently designs and builds nuclear submarines for the US Navy. At the height of the Cold War Electric Boat had as many as 25,000 workers building as many as 15 nuclear-powered submarines at a time. Currently about 7,500 workers are employed at Electric Boat, where there are more engineers and designers than laborers. With more than a century of experience, the Electric Boat company has established standards of excellence in the design, construction and lifecycle support of submarines for the U.S. Navy. Primary operations are the shipyard in Groton, Conn., and the automated hull-fabrication and outfitting facility in Quonset Point, R.I., with a current workforce of nearly 9,000 employees. In 1911, the Electric Boat company acquired the New London Ship and Engine Co. in Groton, Conn., to build diesel engines and other machinery and parts for submarines and commercial ships. During World War I the Electric Boat company received orders to build 85 submarines for the U.S. Navy. The company's ELCO subsidiary builds 722 submarine chasers, while another subsidiary, the Submarine Boat Co., builds 118 Liberty ships. In 1934, the USS Cuttlefish was the first submarine ordered by the U.S. Navy since 1918, is delivered. Cuttlefish is also the first welded submarine and the first submarine built in Groton for the Navy. Over the course of World War II, Electric Boat produces 74 submarines and 398 PT boats. These submarines accounted for 39 percent of all Japanese ships sunk (1,178 merchant vessels and 214 warships). In the early 1950s, the company designed and built the first nuclear-powered submarine, the USS Nautilus. The company has designed 15 of the 18 U.S. classes of nuclear submarines, including all ballistic-missile-firing submarines. Beginning with the USS George Washington in 1960--launched by Electric Boat the previous year--these ballistic-missile submarines have been on continuous patrol, providing a virtually invulnerable strategic deterrent capability and directly influencing the outcome of the Cold War. These deterrent patrols are now conducted by the 18 Electric Boat-built Trident submarines, which represent the centerpiece of a program described as a model of modern military procurement About Specimens Specimen Certificates are actual certificates that have never been issued. They were usually kept by the printers in their permanent archives as their only example of a particular certificate. Sometimes you will see a hand stamp on the certificate that says "Do not remove from file". Specimens were also used to show prospective clients different types of certificate designs that were available. Specimen certificates are usually much scarcer than issued certificates. In fact, many times they are the only way to get a certificate for a particular company because the issued certificates were redeemed and destroyed. In a few instances, Specimen certificates we made for a company but were never used because a different design was chosen by the company. These certificates are normally stamped "Specimen" or they have small holes spelling the word specimen. Most of the time they don't have a serial number, or they have a serial number of 00000. This is an exciting sector of the hobby that grown in popularity and realized nice appreciation in value over the past several years.