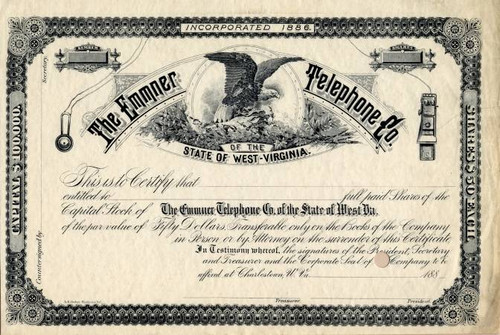 Beautiful specimen certificate from the Emmner Telephone Company dated 188_. This historic document was printed by the A.G. Gedney Company and has an ornate border around it with a vignette of an eagle and an old telephone. The company was incorporated in the state of West Virginia in 1886.

Certificate Vignette
THE EMMNER TELEPHONE COMPANY OF WEST VIRGINIA. I, Henry S. Walker, secretary of state of the state of West Virginia, hereby certify that an agreement duly acknowledged and accompanied by' the proper affidavits, has been this day delivered to me, which agreement is in the words and figures following: The undersigned agree to become a corporation by the name of The Emmner Telephone Company, of West Virginia, for the purpose of constructing and maintaining telephone lines or a system of telephone lines in and from Charlestown, Jefferson county, West Virginia, to all other parts of said county and state. And also for the purpose of connecting and co operating the same with other lines or systems oi telephone and telegraph lines in the state of Maryland and Virginia. And for the general purpose of constructing and maintaining magnetic telegraph and telephone1 ines both underground and overhead and carrying on any business properly pertaining to such works and improvements. Which corporation shall keep its principal office or place of business at Charlestown, in the county of Jefferson, and state of West Virginia, and is to expire on the 25th day of June, niaeteen hundred and tbirty-six. And for the pui pose of forming the said corporation we have subscribed the sum of two hundred and fifty dollars to the capital hereof, and have paid in on said subscriptions the sum of twenty live dollars, and desire the privilege of increasing the said capital by sale- of additional shares from time to time, to one hundred thousand dollars in all The capital so subscribed is divided into shares of fifty dollars each, which are held by the undersigned, respectively, as follows, that is to say: By Bushrod C. Washington, Charlestown, Jefferson county, W. Va., one share; By Gustav Brown, Charlestown. Jefferson county, W. Va., one share; By John Porterfield, Charlestown, Jefferson county, W. Va., one share; By Forest W. Brown, Charlestown, Jefferson county, W. Va., one share; By Frank Beckwith, Charlestown, Jefferson county, W. Va,,one share. ^ And the capital to be hereafter sold is to be divided into shares of like amount. Given under our hand* this 28th day of June, 1886. B. C. Washington, Gustav Brown, About Specimen Certificates Specimen Certificates are actual certificates that have never been issued. They were usually kept by the printers in their permanent archives as their only example of a particular certificate. Sometimes you will see a hand stamp on the certificate that says "Do not remove from file". Specimens were also used to show prospective clients different types of certificate designs that were available. Specimen certificates are usually much scarcer than issued certificates. In fact, many times they are the only way to get a certificate for a particular company because the issued certificates were redeemed and destroyed. In a few instances, Specimen certificates were made for a company but were never used because a different design was chosen by the company. These certificates are normally stamped "Specimen" or they have small holes spelling the word specimen. Most of the time they don't have a serial number, or they have a serial number of 00000. This is an exciting sector of the hobby that has grown in popularity over the past several years.