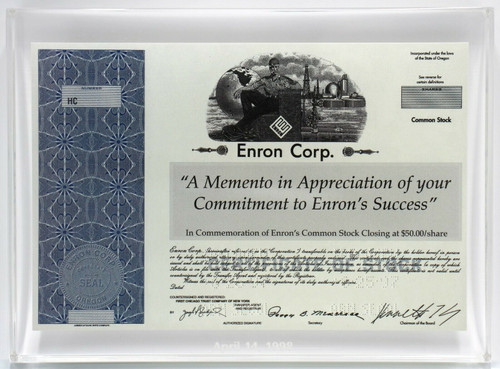 Enron Corp. Lucite Miniature Stock Certificate Award - 1998 - NYSE Miniture Enron Corp. stock certificate encased in lucite with printed signature of Ken Lay. The back of this shows the company's values. These were given to Enron employees to commemorate Enron's stock closing at $50.00 share. It was not long after this event that the stock soared, and the investigation began. Fraud was soon detected, and the company went bankrupt. Enron was one of the largest corporate frauds in our nation's history! The lucite is etched April 14, 1998, on its front. It measures approximately 6 1/2" L x 4 3/4" W x 1" D. It's in excellent condition overall in original holder and box. This Enron promotional item is unique and will make a wonderful addition to any collection. May 25, 2006 - Enron former chief executive Jeffrey Skilling and founder Kenneth Lay were both found guilty Thursday of conspiracy and fraud in the granddaddy of all corporate fraud cases. On the sixth day of deliberations, a jury of eight women and four men convicted the former executives of misleading the public about the true financial health of Enron, whose collapse in late 2001 symbolized the wave of corporate fraud that swept the United States early this decade. Ex-Enron CEO Jeffrey Skilling walks away from reporters in Houston after a jury found him guilty of 19 counts of fraud, conspiracy, false statements and insider trading. Skilling was found guilty on 19 counts of conspiracy, fraud, false statements and insider trading. He was found not guilty on nine counts of insider trading. Lay was found guilty on all six counts of conspiracy and fraud. In a separate bench trial, Judge Sim Lake ruled Lay was guilty of four counts of fraud and false statements. History from Encyberpedia and OldCompany.com (old stock certificate research service)