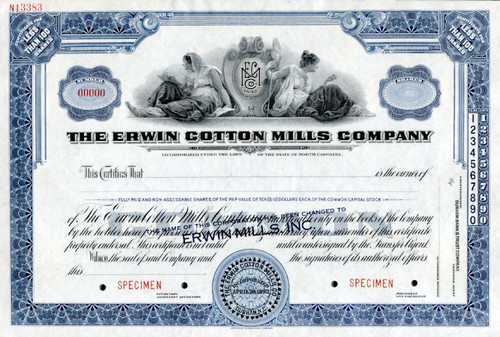 Beautifully engraved rare specimen stock certificate from the Erwin Cotton Mills Company. This historic document was printed by the American Banknote Company and has an ornate border around it with a vignette of two allegorical women flanking the company's logo. 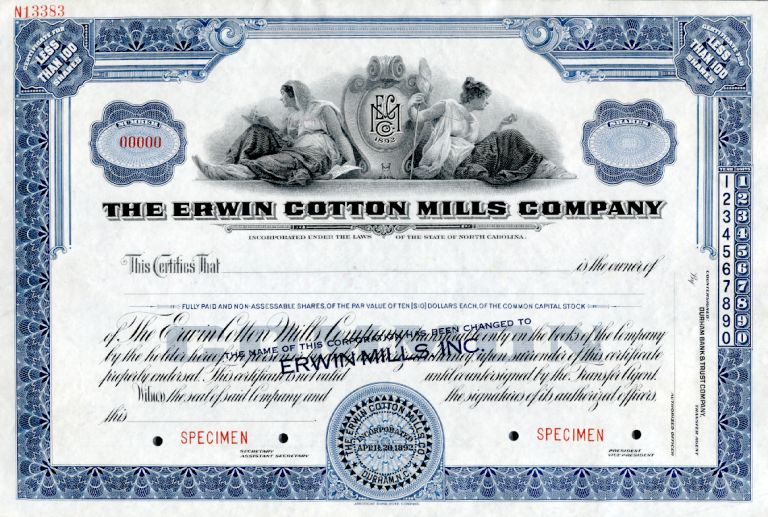 Certificate Vignette
Erwin Cotton Mills was a textile mill in Durham, North Carolina that operated between the years of 1893 and 1986. After seeing the success of other cotton mills in the Northeast and locally in Durham, entrepreneur Benjamin N. Duke incorporated the mill in 1892 and recruited William H. Erwin to manage the enterprise. The mill's success in the late 19th and early 20th centuries was the result of Erwin's and his successors' exceptional management tactics, even when the factory hit obstacles such as the Great Depression and the unionization of its workers. The mill grew quickly in the late 19th century and early 20th century, became one of North Carolina's largest cotton mills. It originally produced muslin pouches for tobacco, but the mill would later expand its production to other fabrics, becoming one of the largest producers of denim in the world during the early 1900s. Workers at the mill enjoyed some of the best working conditions and highest wages in textile factories throughout the southern United States. Mill employees would later sign union-friendly labor agreements that were radical to the southern textile industry in the early to mid 20th century. The establishment of homes, businesses and recreation areas in the mill village was a significant factor in the development of the West Durham, especially the Ninth Street business district and the Old West Durham Neighborhood. Erwin Mill No. 1 is on the National Register of Historic Places and the mill village of West Durham is a National Historic District. An apartment complex, office building and shopping center of the same name that are built on the original site also commemorate the factory. History from Wikipedia and OldCompany.com (old stock certificate research service) About Specimen Certificates Specimen Certificates are actual certificates that have never been issued. They were usually kept by the printers in their permanent archives as their only example of a particular certificate. Sometimes you will see a hand stamp on the certificate that says "Do not remove from file". Specimens were also used to show prospective clients different types of certificate designs that were available. Specimen certificates are usually much scarcer than issued certificates. In fact, many times they are the only way to get a certificate for a particular company because the issued certificates were redeemed and destroyed. In a few instances, Specimen certificates were made for a company but were never used because a different design was chosen by the company. These certificates are normally stamped "Specimen" or they have small holes spelling the word specimen. Most of the time they don't have a serial number, or they have a serial number of 00000. This is an exciting sector of the hobby that has grown in popularity over the past several years.