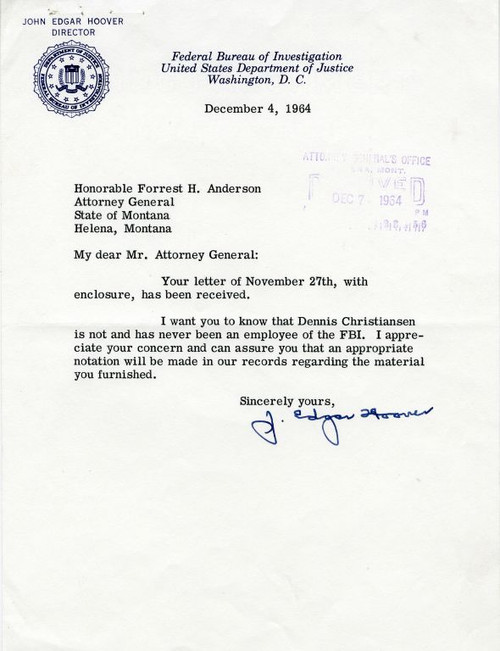 Letter on FBI letterhead to Forrest H. Anderson, Montana Attorney General from the FBI dated 1964. This item is hand signed by the head of the FBI, J. Edgar Hoover and is over 52 years old. 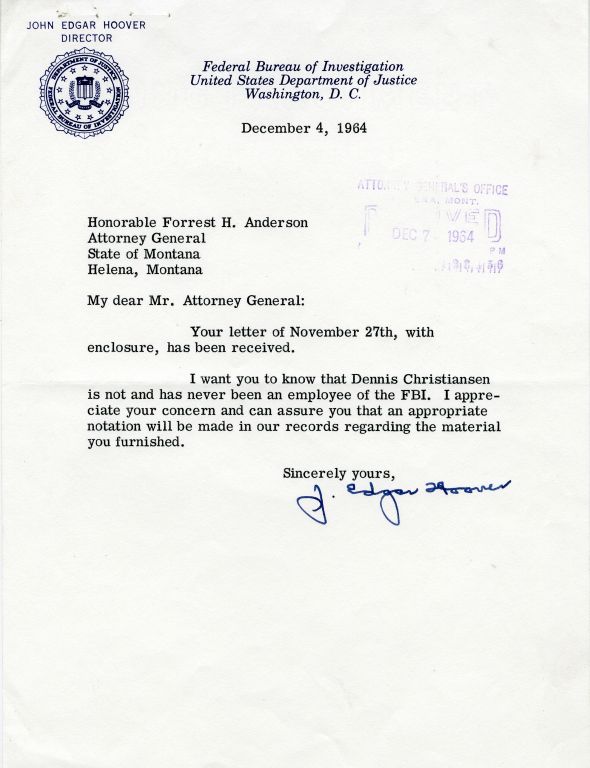 J. Edgar Hoover hand signed letter
John Edgar Hoover (January 1, 1895 - May 2, 1972) was appointed Director of the Federal Bureau of Investigation (FBI) on May 10, 1924 and remained so until his death in 1972. To date, he is the longest-serving leader of an executive branch agency in the United States, having served under a record eight presidents, from Calvin Coolidge to Richard Nixon, and indeed it is because of Hoover that future FBI Directors were limited to a term of ten years. He is credited with creating an effective law enforcement organization, but was also accused of flagrantly abusing his authority in blackmailing notable public figures and unwarrantably engaging in political persecution. He was born in Washington, DC, but the details of his early life are almost unknown; a birth certificate for him was not filed until 1938. All known information can be usually traced back to a single 1937 profile by the journalist Jack Alexander. He was educated at George Washington University, graduating in 1917 with a degree in law. Rather than enlisting for the war he found work with the Justice Department. He soon proved himself capable and was promoted to head the Enemy Aliens Registration Section. In 1919 he became head of the new General Intelligence Division of the Justice Department (see the Palmer Raids). From there in 1921 he joined the Bureau of Investigation (FBI) as deputy head and in 1924 the Attorney General made him director. When Hoover took over the FBI it had approximately 650 employees, including 441 Special Agents. It was renamed and empowered as the Federal Bureau of Investigation in 1935. In 1939 the FBI became pre-eminent in the field of domestic intelligence. Evidently, Hoover amassed significant power by collecting files on people, especially politicians, that were kept off of the official FBI records. This unofficial legacy is speculative because his secretary of decades, (Miss) Helen Gandy, spent the days after Hoover's death destroying all of these files. History from Encyberpedia and OldCompany.com (old stock certificate research service).