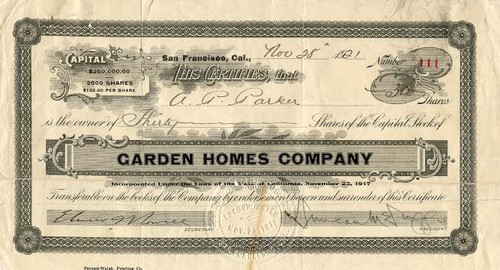 Beautifully engraved certificate from the Garden Homes Company issued in 1921. This historic document was printed by the Pernau-Walsh Printing Company and has an ornate border around it. This item is hand signed by the Company's President ( Duncan McDuffie ) and Secretary and is over 83 years old. This is the first time we have seen this certificate. Duncan McDuffie (1877-1951) received the Pugsley Silver Medal in 1928 "for his services as a member of the California State Parks Commission, in establishing a state park system." He was a residential developer who was an intrepid mountaineer and an active member of the Sierra Club. His efforts in the 1920s were central to helping create the California State Park system and to securing approval for an initial bond package that would fund land purchases for the system. Born on September 24, 1877, in Jefferson, Indiana, McDuffie and his family eventually moved to California. He attended high school in Santa Barbara and obtained a B.S. from the University of California in 1899. After graduation McDuffie became a residential developer in the Berkeley area. Over the years, he acted as president of the Mason-McDuffie Company, the Berkeley Development Company, the Westgate Park Company, the Garden Homes Company, and the St. Francis Home Building Company. He was also credited with the development of a number of subdivisions: Claremont Park, Claremont Court, and Northbrae Properties all in Berkeley, and St. Francis Woods in San Francisco. McDuffie planned a suburban neighborhood that enhanced the spectacular Claremont Hotel and its gardens retaining Frederick Law Olmsted to advise on the project. His subdivisions were not merely roads and residences: they were refined, elegant, and aesthetically pleasing. They were, "...planned around a park or public space that integrated a naturalistic setting with spacious lots for residences of refinement and elegance so as to have ample space for gardens...[with]...planted roadways aligned with the contours of the landscape and upon central transit boulevards planted with overbowering trees, perhaps even supporting an electric line, called "parkways" or "pleasure drives," that were connected to town centers." McDuffie had a sensitivity to the natural world, acquired from his hiking and camping experiences in the Sierras with "Little Joe" LeConte, Jr., who was a professor of mechanical engineering at the University of California and the son of the revered Joseph LeConte, professor of geology and natural history both of whom were early influentials in the growth of the Sierra Club. His appreciation for space, landscaping, and the natural environment that were characteristic of his subdivisions stemmed greatly from McDuffie's personal experiences. As an active member of the Sierra Club, McDuffie made immense contributions to the organization. In 1908, he was a member of the team that made the first ascent of Mt. Abbott (13 736 ft.). Along with J.S. Hutchinson and J.N. LeConte, McDuffie undertook a 300-mile trek over un-scouted territory from Tuolumne to Evolution Basin and Muir Pass to the Kings River, culminating in the ascent of Abbott. In 1920, McDuffie teamed up with J.S. Hutchinson and O. I. Brown to be the first to scale Black Keweah (132 752). After these physical achievements, McDuffie took a leadership role in the Sierra Club. He was vice president in 1928, and president from 1928-31, with a second term from 1943-46. During the interim, he was on the executive committee from 1931 to 1941. McDuffie made lasting contributions to the development of the state park system in California. In 1923 he was appointed chair of a Save-the-Redwoods League committee charged with developing a definitive plan for the development and administration of a state park system. Later, in 1944, he became President of the League. The League believed that the only way to save the Redwoods was to integrate their interests into a comprehensive statewide park development effort. The League's leadership resulted in the creation of California State Parks Council in 1925 with McDuffie serving as chair from its founding until 1930. The council gathered endorsements for proposed legislation to create the state park system. After considerable effort on the part of a number of environmental and community organizations, bills were introduced in the state legislature to (a) form a State Park Commission, (b) undertake a comprehensive survey of potential park sites through the state, and (c) authorize submission of a referendum to approve $6 million for the acquisition and development of state parks. After a meeting in San Francisco in January 1925, at which McDuffie spoke eloquently about the need for and value of a state park system, a widespread effort was launched under the auspices of the California State Park Council to secure passage of all three pieces of legislation. After two years of advocacy work, involving many state and national park leaders, the legislature approved all three pieces of legislation in 1927 and the bond issue was approved by the public in 1928 by a 3 to 1 margin. McDuffie declined an offer to serve on the Council as a matter of principle, based on his close personal and business ties with the governor. Today, a number of legacies stand in Duncan McDuffie's memory. People still walk the wide boulevards of Claremont Park while the more adventurous can scale the peak of Mt. McDuffie in the Palisade Region of the Sierra Nevada. History from the California Park Service website.