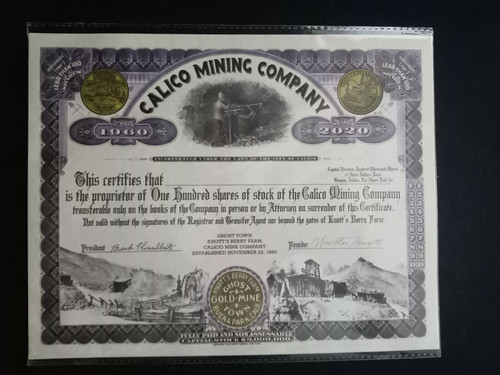 Beautiful novelty unissued certificate from the Calico Mining Company printed in 1954. This historic document  has an ornate border around it with a vignette of a miner underground. This item has the printed signatures of the Company's President, and its Founder Walter Knott and is over 53 years old. This certificate was given out by Knott's Ghost Town (aka Knotts Berry Farm) as a souvenir.

More than a century ago, the town of Calico was bustling with prospectors. Founded in March 1881, it grew to a population of 1,200 with 22 saloons and more than 500 mines. Silver was king, and the Calico Mining District became one of the richest in California, producing $86 million in silver, $45 million in borax and, of course, gold. After 1907, when silver prices dropped and borax mining moved to Death Valley, Calico became a ghost town. Today, Calico is one of the few remaining original mining towns of the western United States. It was preserved by Walter Knott (founder of Knott's Berry Farm and a relative of the owner of Calico's Silver King mine). Mr. Knott donated Calico Ghost Town to the County of San Bernardino in 1966, and it remains alive and well as a 480-acre County Regional Park. Lively events and living history reenactments are hallmarks of this exciting park.