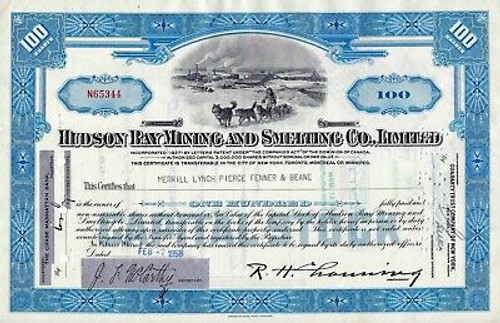 Beautifully engraved certificate from the Hudson Bay Mining and Smelting Co., Limited issued in 1956. This historic document was printed by the American Banknote Company and has an ornate border around it with a vignette of a dog sled. This item has the printed signatures of the company's president (Cornelius Vanderbilt Whitney) and its secretary. The certificate is over 64 years old. 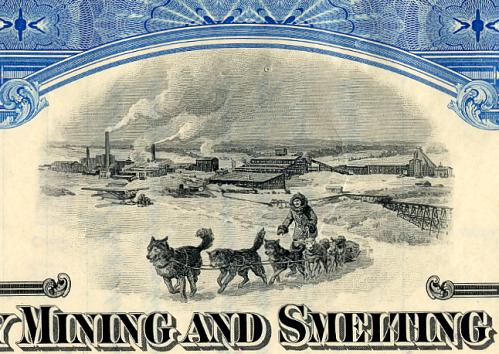 Certificate Vignette
The Flin Flon orebody was discovered by David Collins, a local trapper, and shown to prospector Tom Creighton in 1914. The first claim was registered in 1915. It took more than a dozen years to bring the mine into production because the huge, high grade ore body required large amounts of hydro energy, was isolated, and copper production required a smelter. In 1927, Cornelius Vanderbilt Whitney (a member of the Whitney family of New York), along with Newmont Mining Corp and Mining Corp of Canada Ltd., founded Hudson Bay Mining & Smelting (HBM&S), which took over controlling interest in the Flin Flon property. By 1930, the mine, smelter, hydroelectric dam and railroad were in full operation. Eight years later, the company was listed on the New York Stock Exchange under the symbol HBM. By the late 1950's, Hudbay had developed and operated 28 mines in the Flin Flon Greenstone Belt. In 1960, Hudbay opened its first mine in Snow Lake, 215 kilometres east of Flin Flon. Four years later, production began at Stall Lake mine. In the 1960's, Hudbay also gained a new major investor, Anglo America, a South African mining company. Throughout the 1970s and 1980s, Hudbay continued to mine and explore in and around Flin Flon and Snow Lake, discovering new deposits, such as Trout Lake and Chisel North, and starting production at new mines, like Anderson Lake. After more than 60 years in operation, in 1992, Hudbay closed its original Flin Flon mine; however, one year later, as a result of underground exploration, Hudbay discovered a substantial orebody that would become its flagship 777 mine in Flin Flon.