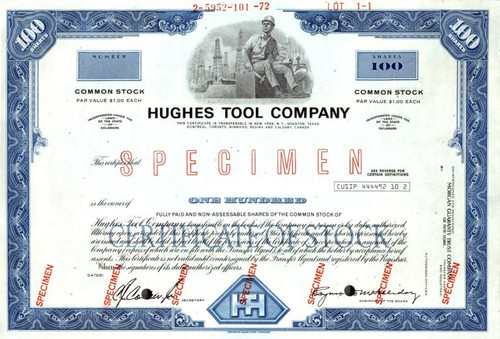 Beautifully engraved RARE specimen certificate from the Hughes Tool Company printed in 1972. This historic document was printed by the American Banknote Company and has an ornate border around it with a vignette of an engineer in front of oil derricks. This item has the printed signatures of the Company's officers with Raymond M. Holliday as Chairman. This is the first time he have had this certificate for sale. 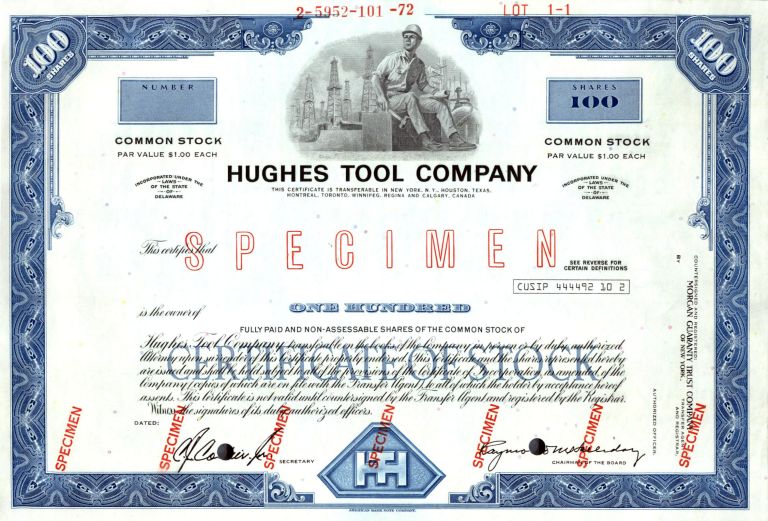 Certificate
Howard Hughes, Jr., sold Hughes Tool Company in an initial public offering in 1972. Hughes Tool Company was established in 1908 as Sharp-Hughes Tool Company when Howard R. Hughes, Sr. patented a roller cutter bit that dramatically improved the rotary drilling process for oil drilling rigs. He partnered with longtime business associate Walter Benona Sharp to manufacture and market the bit. Following her husband's death in 1912, Sharp's widow Estelle Sharp sold her 50% share in the company to Howard Hughes, Sr. in 1914. The company was renamed Hughes Tool Company on February 3, 1915. When Hughes Sr. died in 1924, 75% of the company was left to Howard Hughes Jr., who at the time was a student at William Marsh Rice Institute (now Rice University). According to Howard Sr.'s will, his son was to initially receive a 25% share, his wife 50%, and the remaining 25% was to be divided between various family members. Since Howard Sr.'s wife had died some years earlier, and the will had not been updated to reflect that, Howard Jr. automatically inherited his mother's shares. Resentful of his relatives' attempts to run the business, Howard Hughes Jr. had himself declared a legal adult (21 being the age of majority at the time), and bought out his relatives' minority share in the business. Under Howard Jr.'s ownership, Hughes Tool ventured into the motion picture business via Hughes Productions during the 1920s, and into the airline business in 1939 with the acquisition of a controlling interest in Transcontinental and Western Air (later renamed Trans World Airlines). In 1932, Hughes formed Hughes Aircraft Company as a division of the Hughes Tool Company. Hughes Aircraft thrived on wartime contracts during World War II (though not on the only two contracts it received to actually build airplanes), and by the early 1950s was one of America's largest defense contractors and aerospace companies with revenues far outpacing the original oil tools business. In 1953, Hughes Aircraft became a separate company and was donated to the Howard Hughes Medical Institute as its endowment. Hughes Aircraft's helicopter manufacturing business was retained by Hughes Tool Co. as its Aircraft Division until 1972. For a period of time in the 1940s to late 1950s, Hughes Tool owned the RKO companies, including RKO Pictures, RKO Studios, RKO Theatres, and the RKO Radio Network. For a brief period in the early 1960s, Hughes Tool held a minority stake in Northeast Airlines. Hughes Tool's majority stake in TWA was sold off in 1966. Two years later, in 1968, Hughes Tool Company purchased the North Las Vegas Air Terminal. In the late 1960s, Hughes Tool ventured into the hotel and casino business with the acquisition of the Sands, Castaways, Landmark, Frontier, Silver Slipper, and Desert Inn, all in Las Vegas. Hughes Tool also purchased KLAS-TV, Las Vegas' CBS affiliate. In the early 70's, Hughes Tool ventured back into the airline industry with the takeover of the largest regional air carrier in the western United States: Air West, renamed Hughes Airwest following the purchase. Hughes Tool also briefly owned Los Angeles Airways, a small airline operating a commuter service with a fleet of helicopters. In 1968, Hughes Tool purchased Sports Network Incorporated and renamed it the Hughes Television Network, with Dick Bailey continuing as president. The huge main plant for Hughes Tool located in Houston, Texas, fronting Harrisburg Blvd., had grown to be one of the biggest oil tool manufacturers in the World. It had the latest, largest, and most automated equipment for foundries, forging, heat treating, and machining anywhere. At its peak during the Texas Oil Boom, it was a center for manufacturing, design, research, metallurgy, and engineering for oil field technologies. This included the drill bit (well) and tool joint product lines critical for oiland gas drilling, some of the first technologies for ram blast bits for drilling in mines, geothermal drilling, and a hydraulic powered jackhammer known as the Hughes Impactor.[3] It also manufactured a line of truck and crane-mounted earth augering machines ("diggers") that were most commonly used to produce holes up to a depth of about 120 feet (37 m) for building and bridge foundations. It even had a fully functioning drilling simulator inside its main research lab where production or prototype drill bits could be tested on any kind of rock at temperatures and pressures normally encountered in actual drilling operations. In 1972, Howard Hughes sold the Hughes Tool Company; it had been the consistently profitable part of his empire, and produced the profits that built all the rest from the very beginning. This became the "new" Hughes Tool Company while the remaining divisions of the business were placed in a new holding company, the Summa Corporation. Hughes Tool merged with Baker International to form Baker Hughes Incorporated in 1987. History from Wikipedia, Encyberpedia and OldCompany.com (old stock certificate research service) About Specimen Certificates Specimen Certificates are actual certificates that have never been issued. They were usually kept by the printers in their permanent archives as their only example of a particular certificate. Sometimes you will see a hand stamp on the certificate that says "Do not remove from file". Specimens were also used to show prospective clients different types of certificate designs that were available. Specimen certificates are usually much scarcer than issued certificates. In fact, many times they are the only way to get a certificate for a particular company because the issued certificates were redeemed and destroyed. In a few instances, Specimen certificates were made for a company but were never used because a different design was chosen by the company. These certificates are normally stamped "Specimen" or they have small holes spelling the word specimen. Most of the time they don't have a serial number, or they have a serial number of 00000.