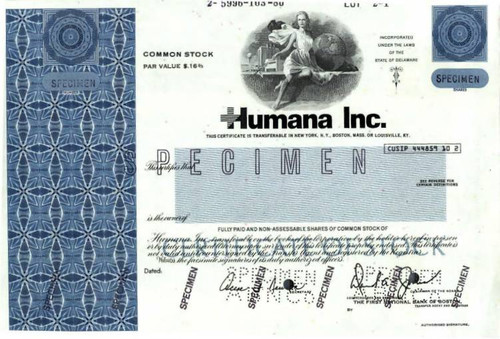 Beautifully engraved SPECIMEN certificate from the Humana, Inc.. This historic document was printed by the American Banknote Company in 1980 and has a block ornate border with a vignette of a woman next to a world globe. This item has the printed signatures of the Company's Chairman ( David A. Jones ) and Secretary ( Joice F. Newton ). Humana Inc. is a for-profit American health insurance company based in Louisville, Kentucky. As of 2014 Humana has had over 13 million customers in the U.S., reported a 2013 revenue of US$41.3 billion, and has had 51,600 employees. In 2013, the company ranked 73 on the Fortune 500 list, which made it the highest ranked (by revenues) company based in Kentucky. It has been the third largest health insurance in the nation.

Arnold Seligmann, Rey & Co. RARE Stock Certificate issued to and signed by Jean A. Seligmann, famous Jewish art dealer, who was shot by the Nazis during WWII to steal his art inventory - 1935