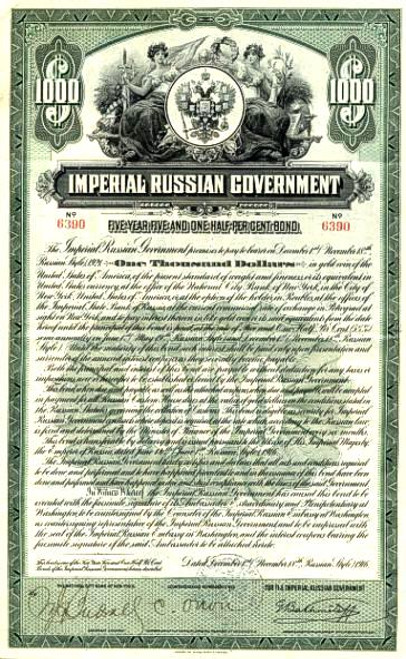 Beautifully engraved uncancelled $1,000 Gold Bond Certificate from the Imperial Russian Government issued in 1916. This historic document was printed by the American Banknote Company and has an ornate border around it with a vignette two allegorical women on the side of the Imperial Russian Government Seal. This item has been hand signed and is over 102 years old. Light tape residue.

Certificate Vignette
This bond was issued by the government of Russian Tsar Nicholas II to help fund the huge WWI debt. This is a very unusual certificate since it was issued in dollars by U.S. Banks on behalf of the Imperial Russian Government. Overall, 29% of the WWI expenses incurred from the beginning of the war until the February Revolution of 1917 were financed by issuing paper currency and bonds. This caused hyper inflation in Russia. As inflation increased, gold, silver, and even copper coins began disappearing from circulation, becoming a way for the population to store value. It is estimated that in February of 1917, the purchasing power of one paper ruble lost 75% of its value from the period before the war began. This undoubtedly contributed to the 1917 revolution.