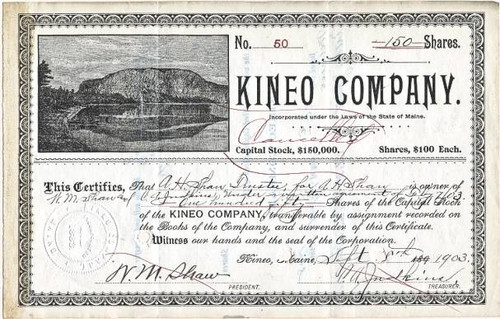 Beautifully engraved certificate from the Kineo Company issued in 1902. This historic document has an ornate border around it with a vignette of Moosehead Lake with two men in a canoe with Mt. Kineo in the background. The certificate is signed by the Company's President, W. M. Shaw and Treasurer, C. A. Judkins and is over 109 years old. This is only the second time we have had an issued certificate from this company for sale. 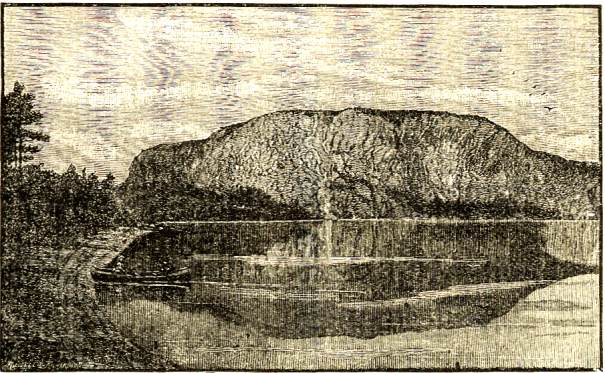 Certificate Vignette
Mt. Kineo, midway of Moosehead Lake, which is forty miles in length and the largest lake wholly within New England. Kineo is a peninsular of land extending from the easterly shore into the lake, containing eleven hun- dred and fifty acres. Upon it is a mountain that rises seven hundred feet above the lake level. It is composed of a peculiar geological formation of flint rock known as silicious slate or bornstone. It is the largest mass of this rock known in this country and was well adapted to the use of the Indians in making arrowheads, hatchets, chisels, etc. As Indian implements made from this rock have been found in all parts of New England and even farther to the southward, it is evident that the red-men visited this mountain for centuries for the purpose of obtaining this material. Kineo is in the heart of an immense primeval wilderness that is unbroken to the Dominion of Canada. In 1846 when Henry D. Thoreau visited the Moosehead Lake region, Kineo Mountain, its geological formation, its Indian relics and its traditions all deeply interested this great author and philosopher. A Hotel called the Mount Kineo House was built in 1884, and nestled in the rugged highlands of Maine on the shores of the mighty Moosehead Lake. Following the purchase of the hotel by the Maine Central Railroad in 1911, the Hiram Ricker Hotel Company was engaged to operate the hotel. The following is from a promotional pamphlet for the Mount Kineo House printed in 1889: "The Mount Kineo House stands on the border of the lake just south of the mountain, a site which commands an unequalled view of the lake for nearly twenty miles, and of the surrounding forests and moutains in all directions." (Pamphlet, Mount Kineo House, 1889) "This hotel is planned on an ample scale and believed to be second to none in construction, general arrangement and convenience, as well as in its provision for the security and comfort of its guests. The dining room is 100 x 51 feet, seating four hundred people. Particular attention has been paid to the sanitary arrangements and drainage. The sleeping rooms are large, light, all provided with the best of mattresses and springs, and reached by broad stairways or steam elevator. Every room commands an excellent view of lake and mountain scenery. A piazza fifteen feet wide extends around the main house." (Pamphlet, Mount Kineo House, 1889) "Billiard hall, telegraph and post office in the house. The location on a point extending into the lake insures freedom from mosquitos and other annoying insects. The fact that the house is under the same management as for more than twenty years past, is, to our old patrons, a sufficient guaranty the the table and service generally will be of the the best." (Pamphlet, Mount Kineo House, 1889)