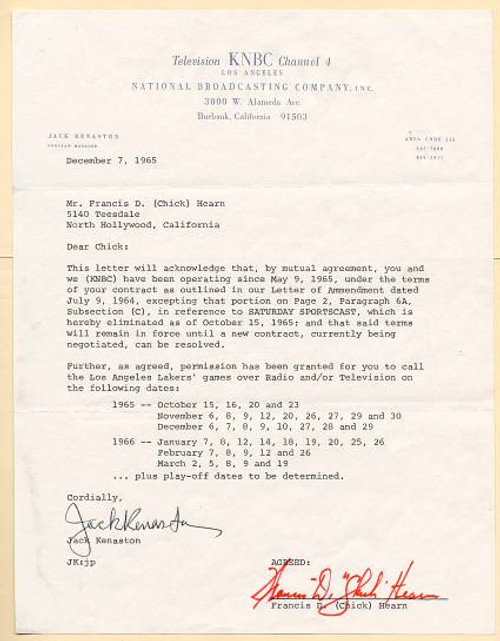 Letter from Television KNBC Channel 4 National Broadcasting Company, Inc. This historic document has a Company letterhead of the Program Manager Jack Kenaston. This item has been hand signed by the KNBC's Program Manager, and Chick Hearn, and is over 46 years old.

Hand signed by Francis D. (Chick) Hearn
Francis Dayle "Chick" Hearn (November 27, 1916 August 5, 2002) was an American sportscaster. Known primarily as the long-time play-by-play announcer for the Los Angeles Lakers of the National Basketball Association, the legendary Hearn is remembered for his rapid fire, staccato broadcasting style, inventing colorful phrases such as slam dunk, air ball, and no harm, no foul that have become common basketball vernacular, and for broadcasting 3,338 consecutive Lakers games starting on November 21, 1965.[1] Additionally, Hearn started the now common tradition of estimating the distance of shots taken. Of note is that most of Hearn's games in the television era were simulcast on both radio and television, even after most teams chose to use different announcers for the different media. History from StockResearch.pro (Professional Old Stock Certificate Research Service).