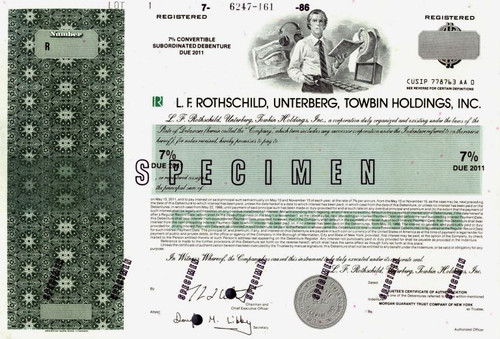 Beautifully engraved specimen certificate from the LF Rothchild, Unterberg Towbin Holdings Inc. printed in 1986. This historic document was printed by the American Banknote Company and has an ornate border around it with a vignette of a man with headphones and a computer. This item has the printed signatures of the Company's officers including Thomas I. Unterberg as Chairman. 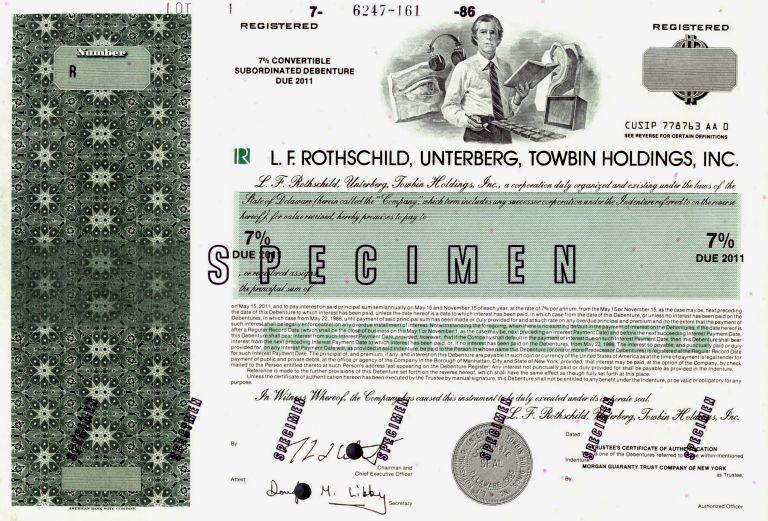 Certificate
L.F. Rothschild (later known as L.F. Rothschild, Unterberg, Towbin) was a merchant and investment banking firm based in the United States and founded in 1899. The firm collapsed following the 1987 stock market crash. L.F. Rothschild & Co. was founded in 1899 by Louis F. Rothschild (18691957), not related to the European Rothschild family. Together with partner Leonard Hochstadter, Rothschild took up the offices and business of Albert Loeb & Co. at 32 Broadway.[2] The firm's primary business was sales and trading of fixed income securities. The firm also had an arbitrage group as well as retail brokerage and wealth management operations. Following its merger with C.E. Unterberg, Towbin in 1977, the firm was known as L. F. Rothschild, Unterberg, Towbin and was led primarily by Thomas I. Unterberg and A. Robert Towbin. The firm was known for its merchant banking investments, particularly in high-technology companies. In the early 1980s, the firm emerged as the leading underwriter of initial public offerings, surpassing the elite investment banks (at the time, including Lehman Brothers, Goldman Sachs and Morgan Stanley). Among the companies they took public were Intel, Cray Research and biotechnology company Cetus Corporation. In 1986, just ten years after merging with L.F. Rothschild, Towbin and Unterberg left the firm to join Shearson Lehman. The split was attributed to their opposition to plans to expand the firm's bond sales and trading operations. However, in the negotiations with outside firms related to that expansion and capital infusion, at least one particularly attractive offer required that Unterberg and Towbin step down from management positions or leave the firm. Hard feelings between senior management that resulted by considering that offer were believed to be the causal factor behind their departure by most insiders. Ultimately, the firm's stock trading exposure during the stock market crash in 1987 led directly to its demise. Unterberg would leave Lehman four years later, in 1990 to form Unterberg Harris. The firm suffered heavy losses in the 1987 stock market crash and was acquired by Kansas-based Franklin Savings Association in February 1988. However, even with new capital, the firm's holding company, L. F. Rothschild Holdings Inc. filed for Chapter 11 bankruptcy protection in July 1989. By the end of 1989, the firm had gone from a peak of 2,200 employees to 45. History from Wikipedia, Encyberpedia and OldCompany.com (old stock certificate research service) About Specimen Certificates Specimen Certificates are actual certificates that have never been issued. They were usually kept by the printers in their permanent archives as their only example of a particular certificate. Sometimes you will see a hand stamp on the certificate that says "Do not remove from file". Specimens were also used to show prospective clients different types of certificate designs that were available. Specimen certificates are usually much scarcer than issued certificates. In fact, many times they are the only way to get a certificate for a particular company because the issued certificates were redeemed and destroyed. In a few instances, Specimen certificates were made for a company but were never used because a different design was chosen by the company. These certificates are normally stamped "Specimen" or they have small holes spelling the word specimen. Most of the time they don't have a serial number, or they have a serial number of 00000.