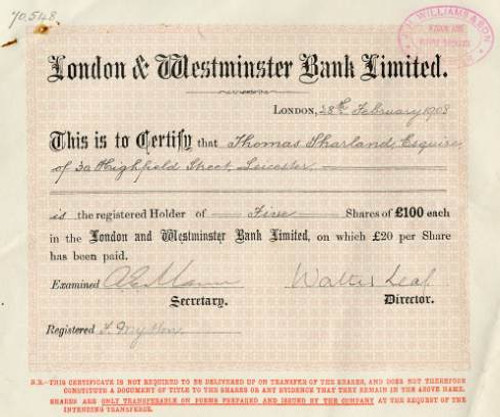 Beautifully printed certificate from the London & Westminster Bank Limited issued in 1908. This item is hand signed by the Company's Director and Secretary and is over 96 years old. In 1861 Commercial Bank of London (established 1840) was acquired, followed by London & Middlesex Bank (established 1862) of Lambeth in 1863 and the important private bank Jones, Loyd & Co (established 1771) of Lothbury, City of London, in 1864. In the 1880s and 1890s a further branches were opened in the West End and by 1905 there were 35 branches, mostly in central London but also in the suburbs. The bank's paid-up capital grew from £597,000 in 1836 to £2.8 million in 1881 and it adopted limited liability in 1880 as London & Westminster Bank Ltd. In August 1909 the bank was wound up upon its amalgamation with London & County Banking Co (established 1836) which was renamed London County & Westminster Bank, and later known as Westminster Bank.