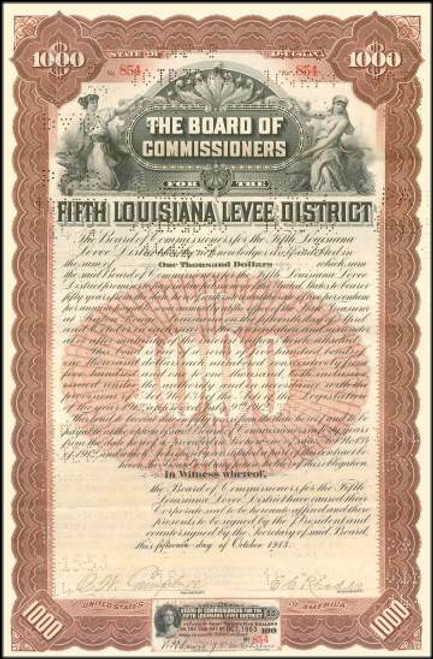 Beautifully engraved certificate from the Board of Commissioners for the Fifth Louisiana Levee District issued in 1913. This historic document has an ornate border around it with a vignette of the company logo between allegorical women. This item is hand signed by the Company's President and Secretary and is over 93 years old.

Certificate Vignette
The Fifth Levee District includes the parishes of Concordia, Tensas, Madison and East Carroll. The formal levee system in New Orleans dates to about 1890, when the Orleans Levee District was created. Levees may resemble earthen dams, but are not as strong. Unlike dams, which are considered "permanent" structures, many levees are engineered to withstand strong flood pressure for only a few days at a time, said Mr. Rogers. That could call into question the durability of the levee running the full length of the northern edge of New Orleans, where the waters of Lake Pontchartrain are lapping near the top. Levees built by the federal Army Corps of Engineers, which took on a major flood-control role after the 1927 deluge, are typically engineered to high standards and are quite strong. Most levees along the main Mississippi River channel are federally constructed. But in some areas, including around Lake Pontchartrain, some levees were built privately or by local governments and may not have the same degree of engineering.