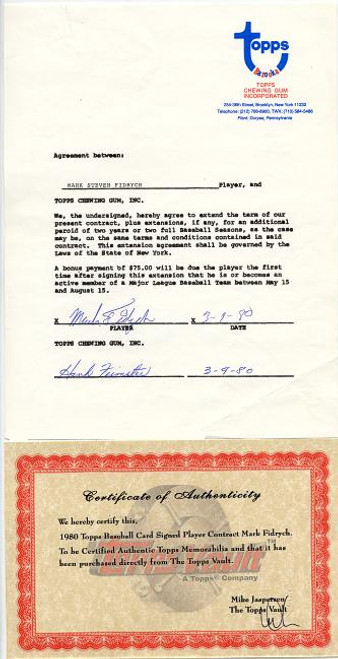 Mark Fidrych Player Contract Topps Baseball Card Signed Player Contract signed by Mark Fidrych. Direct from Topps' legendary Vault, this item features an original Topps baseball card contract. Contract is signed and dated by the player, as well as an official representative of the Topps Co. Contract measures 8 1/2" X 11" in size and is dated 3/9/1980. By signing this contract, the player received a bonus payment of $75. This also comes with a Certificate of Authenticity from The Topps Vault.

Mark Fidrych signature
Mark Steven "The Bird" Fidrych (born August 14, 1954 in Worcester, Massachusetts) was a Major League Baseball player for the Detroit Tigers. Mark Fidrych on the cover of Sports Illustrated with Big BirdThe son of an assistant school principal, he played baseball at Algonquin Regional High School in Northborough, Massachusetts. In the 1974 amateur draft, he was not selected until the 10th round, when the Detroit Tigers picked him. In the minor leagues one of his coaches dubbed the lanky right-handed pitcher "The Bird" because of his resemblance to "Big Bird" of the Sesame Street television program. Fidrych made the Tigers as a non-roster invitee out of spring training, not making his major-league debut until April 20, and not making his first start until mid-May. He only made that start because the scheduled starting pitcher had the flu. Fidrych responded by throwing seven no-hit innings, ending the game with a 2-1 victory in which he only gave up two hits. He went on to win a total of 19 games, led the league in ERA (2.34) and complete games (24), was the starting pitcher in that year's All-Star Game, won the American League Rookie of the Year Award, and finished second in voting for the Cy Young Award. In the process Fidrych also captured the imagination of fans with his antics on the field. He would crouch down on the pitcher's mound and fix cleat marks, what became known as "manicuring the mound", talk to himself, talk to the ball, aim the ball like a dart, strut around the mound after every out, and throw back balls that "had hits in them," insisting they be removed from the game. On June 28, 1976 he pitched against the New York Yankees in a nationally televised game on ABC; the Tigers won the game 5-1. After a game filled with "Bird" antics in which he and his team handily defeated the Yankees, Fidrych became an instant national celebrity. Every time he pitched, Tiger Stadium was jam-packed with adoring fans. In his 18 appearances, attendance equalled almost half of the entire season's 81 home games. Teams started asking Detroit to change its pitching rotation so Fidrych could pitch in their ballparks, and he appeared on the cover of numerous magazines, such as Sports Illustrated (twice, including once with Sesame Street character Big Bird), The Sporting News, and became the first athelete to appear on the cover of Rolling Stone. In one week, Fidrych turned away five people who wanted to be his agent, saying, "Only I know my real value and can negotiate it." Fidrych also drew attention for the simple, bachelor lifestyle he led in spite of his fame, driving a green subcompact car, living in a small Detroit apartment, wondering aloud if he could afford to answer all of his fan mail on his league-minimum $16,500 salary, and telling people that if he hadn't been a pitcher, he'd work pumping gas in Northborough. He fascinated everyone, most especially young girls, with his frizzy blond curls, blue jeans, and devil-may-care manner. At the end of his rookie season, the Tigers gave him a $25,000 bonus and signed him to a 3-year contract worth $255,000. Economists estimated that the extra attendance Fidrych generated around the league in 1976 was worth more than $1 million. Unfortunately for Fidrych, he tore the cartilage in his knee fooling around in the outfield during spring training in 1977[1]. He picked up where he left off after his return from the injury, but about six weeks after his return, during a game against Baltimore, he felt his arm just, in his words, "go dead." It was a torn rotator cuff, but it would not be diagnosed until 1985. [2]. Fidrych managed to finish the season 6-4 with a 2.89 ERA and was again invited to the All-Star Game, but he declined the invitation due to injury. He pitched only three games in 1978, winning two. On August 12, 1980, 48,361 fans showed up at Tiger Stadium to see what would be his last attempt to make a comeback. At the end of the 1981 season, Detroit gave Fidrych his outright release and he signed as a free agent with the Boston Red Sox, playing for one of their minor league teams. However, his torn rotator cuff, still undiagnosed and untreated, never healed. At age 29, he was forced to retire. After seeing everyone from chiropractors to hypnotists, Fidrych went to famed sports doctor James R. Andrews in 1985. Dr. Andrews discovered the torn rotator cuff, operated, and cleaned out the shoulder, but it was too late for another comeback. So a promising career ended too soon and unnecessarily, just as Wally Bunker's had a decade earlier. Today, Mark Fidrych lives on a farm in Northborough, and is also a licensed and working commercial trucker. His family currently owns and runs a diner in Northborough called Chet's Diner. Fidrych was inducted into the Shrine of the Eternals of the Baseball Reliquary in 2002. In a 1998 interview, when asked who he would invite to dinner if he could invite anyone in the world, Fidrych said, "My buddy and former Tigers teammate Mickey Stanley, because he's never been to my house." History from Wikipedia and OldCompanyResearch.com.