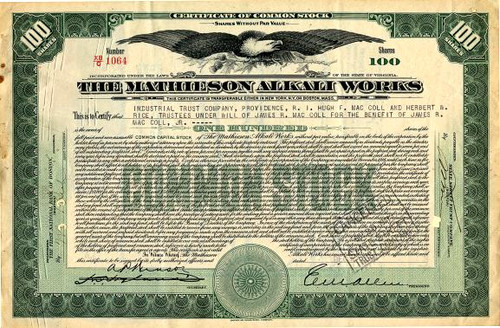 Beautiful certificate from the Mathieson Alkali Works issued in 1941. This historic document was printed by American Bank Note Company and has an ornate border around it with a vignette of an eagle. This item has the signatures of the Company's President and Secretary and is over 66 years old.

Certificate Vignette
Mathieson Chemical Corporation was founded in 1892. Thomas Mathieson, a young British engineer backed by a consortium of seven U.S. businessmen, designed and built a plant to produce soda ash from the abundant deposits of salt, coal and limestone in Saltville, Virginia. Then known as the Mathieson Alkali Works, the company was soon shipping much needed soda ash to the glass, textile and paper industries. In 1896, the company began producing the nation's first commercially available bleaching powder. A year later, Mathieson was producing chlorine and caustic soda at its new hydroelectric plant in Niagara Falls, New York. By the 1950s, Mathieson had expanded into industrial and agricultural chemicals, producing the sulfuric acid needed for fertilizers and pesticides. The Olin Corporation is the result of a 1954 merger of Olin Industries and Mathieson Chemical Corporation. Although both companies were founded in the same year, over 100 years ago, and had complimentary manufacturing businesses with similar philosophies, they produced very different products. History from Wikipedia and OldCompanyResearch.com.