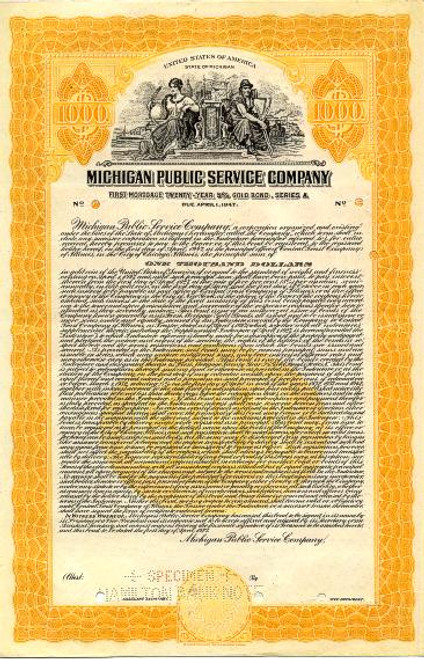 Beautifully engraved Specimen $1000 Gold Bond Certificate from the Michigan Public Service Company dated 1927. This historic document was printed by Hamilton Bank Note Company and has an ornate border around it with a vignette of a man and woman with a train, ship and city in the background. This item is over 79 years old. 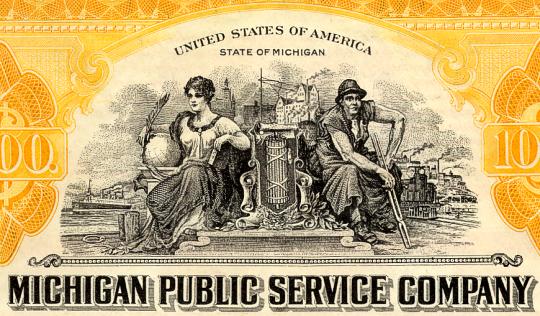 Certificate Vignette
History from OldCompany.com - Stock and Bond Research Search: Incorporated under Michigan laws in May. 1927, as successor to company of same name. Acquired by consolidating the physical properties formerly owned by Boyne City Electric Co., Boyne River Power Co., White River Power and Light Co., Michigan United Light & Power Co., Michigan Public Service Co., Grayling Electric Co. and Elk Electric Co. In 1928, acquired properties of Northern Michigan Public Service Co. and in 1929 entire capital stock of East Jordan Electric Light & Power Co. On June 30, 1939, company acquired the hydro-electric generating plant and other property of Inland Power & Light Corp. (former parent company) in and about Cheboygan, Mich., together with entire capital stock of Cheboygan Slackwater Navigation Co. In Oct., 1930, control of company was acquired from Inland Power & Light Corp. through purchase of all common stock by a syndicate headed by Otis & Co., Cleveland. Stock was subsequently offered to the public. MANAGEMENT Officers A. S. Dewing, Chairman W. C. Blanchard, President L. E. Cotton, Vice-President 0. H. Wing. Vice-President G. E. Olmsted, Secretary & Treasurer G. H. Ramsey, Asst. Treasurer Directors W. C. Blanchard, Traverse City W. R. Carlson. Boston L. E. Cotton, Boston A. S. Dewing, BUSINESS Furnishes without competition electric light and power to 100 communities in western Michigan (territory extends from Muskegon County near Whitehall northward on the east shore of Lake Michigan through Ludington and Traverse City to Mackinaw City and Cheboygan) with a combined estimated population of 62,000. The principal industries of the territory served are agriculture, fruit growing, manufacturing on a small scale, and summer vacation and tourist business. Also sells electricity at wholesale to 3 communities with an estimated population of 2,200. Water service is supplied at Gaylord. Among communities served are Cheboygan, Pellston, Gaylord, Grayling, Elk Rapids, Boyne City, Kalkaska, Ludington, Scottville, Pentwater, Hart, Shelby, Hesperia, Montague, Whitehall, Traverse City, Mancelona, Sutton/ Bnalaay, and L a u Eastpoakrt, e East Jord.an, Idlewild, Lee- PROPERTY Electric system includes 13 hydro-electric plants, 1 steam electric plant and 2 Diesel driven plants having a total installed capacity of 14,472 k.w. and 840 miles of high tension transmission lines. Water service supplied at Gaylord; 3.5 miles of main, 497 customers; daily pumping capacity, 600,000 gallons. Electric Rates: Urban electric service ratesfor residential and commercial service ar, divided into three main groups as follows: Group I-Rates for cities or towns havini 500 or more electric meters. Group II-Rates for towns having 1 to 4% electric meters. About Specimens Specimen Certificates are actual certificates that have never been issued. They were usually kept by the printers in their permanent archives as their only example of a particular certificate. Sometimes you will see a hand stamp on the certificate that says "Do not remove from file". Specimens were also used to show prospective clients different types of certificate designs that were available. Specimen certificates are usually much scarcer than issued certificates. In fact, many times they are the only way to get a certificate for a particular company because the issued certificates were redeemed and destroyed. In a few instances, Specimen certificates we made for a company but were never used because a different design was chosen by the company. These certificates are normally stamped "Specimen" or they have small holes spelling the word specimen. Most of the time they don't have a serial number, or they have a serial number of 00000. This is an exciting sector of the hobby that grown in popularity and realized nice appreciation in value over the past several years. Gold Bonds Bonds were Payable in Gold or Gold Coin to give the impression that they were a more secure investment. In reality, they were not more secure since there wasn't any gold set aside as collateral for these bonds. On April 5, 1933, President Franklin D. Roosevelt signed Presidential Executive Order 6102 which invoked his authority to make it unlawful to own or hold gold coins, gold bullion, or gold certificates. The export of Gold for purposes of payment was also outlawed, except under license from the Treasury. On January 30, 1934, the Gold Reserve Act became law which made the ownership of gold illegal except for coins of numismatic value. As a result of this law, Bonds were no longer allowed to be Payable in Gold.