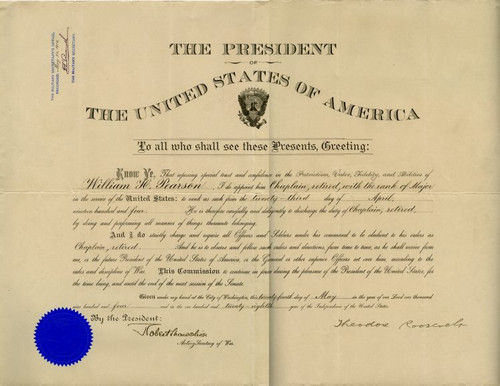 This Autographed 21" x 16" Military Appointment Dated May 28, 1904 document has been personally Signed by Theodore Roosevelt as President of the United States and Robert Shaw Oliver as Acting Secretary of War. This item is over 117 years old.  William H. Pearson was appointed to a Chaplain, retired with the rank of Major.  Folded in center and light folds off center.

Theodore Roosevelt Jr. October 27, 1858 – January 6, 1919), often referred to as Teddy or his initials T. R., was an American politician, statesman, conservationist, naturalist, historian, and writer who served as the 26th president of the United States from 1901 to 1909. He previously served as the 25th vice president under William McKinley from March to September 1901, and as the 33rd governor of New York from 1899 to 1900. Having assumed the presidency after McKinley's assassination, Roosevelt emerged as a leader of the Republican Party and became a driving force for anti-trust and Progressive policies.

Robert Shaw Oliver served as a second lieutenant in the 5th Massachusetts Colored Cavalry at the age of 17. After the Civil War, he remained in the Army assigned to the 25th Army Corps in Texas and the 8th US Cavalry in California, Oregon and Arizona fighting in many Indian campaigns until 1879. From 1881 to 1903, he was employed by Rathbone, Sard & Co., stove manufacturers in Albany. In 1881, he was elected as the first president of the United States National Lawn Association, known today as the USTA. He served as brigadier general of the 3rd brigade of the New York State Militia. In 1903, he was appointed Assistant Secretary of War by President Theodore Roosevelt and continued under President William Howard Taft, serving for ten years. General Oliver spoke at the dedication of several monuments to Civil War Union Units from Pennsylvania at the Antietam Battlefield in 1904. The content of his speech can be found in the reference.