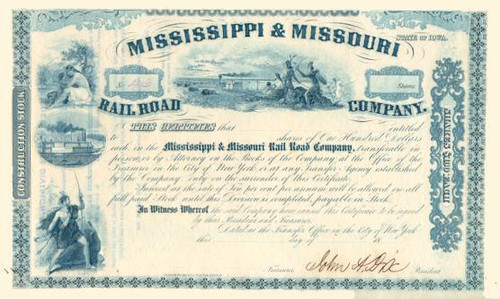 Beautifully engraved unissued certificate from the Mississippi & Missouri Rail Road Company dated 18XX. This historic document has an ornate border around it with vignettes of an allegorical woman and child, a shipboat, an Indian warrior, and a group of Indians watching a train pass. This item is hand signed by the company's president ( John Dix ) and is over 100 years old. John Adams Dix - born July 24, 1798 , Boscawen, N.H., U.S. died April 21, 1879 , New York City. political leader and U.S. Army officer who, as secretary of the treasury of the United States (1861), issued to a treasury officer in New Orleans the famous order: "If any one attempts to haul down the American flag, shoot him on the spot." He entered the U.S. Army at the age of 14 and served in the War of 1812 and the U.S. Civil War (186165). Major General John Dix also served as a United States Senator, Governor of New York, Ambassador to France and Secretary of Treasurer.