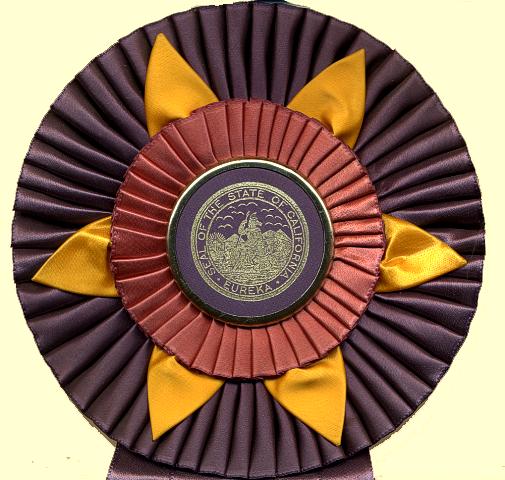 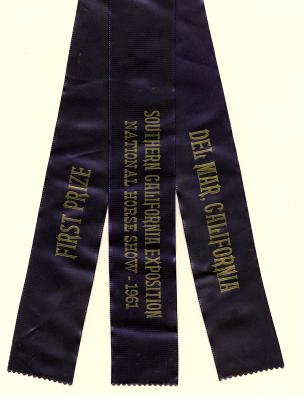 Bottom of Ribbon
When the Del Mar National Horse Show celebrated its 60th anniversary in 2005, it joined the elite few horse shows in the United States that thrive into their golden years. The Del Mar National Horse Show has been referred to simply as ' Del Mar' for generations. Del Mar is, and has always been, an outstanding national show. Showing at Del Mar means you're heading for seriously intense competition. It means you're gearing up for some white-knuckle go's either on the trail course, dressage arena, or over fences. Del Mar at one time or another has been the biggest, or the toughest, or the richest. Del Mar continues to be the most prestigious horse show in Southern California. To win at Del Mar is to win big. In the beginning, the show was a part of the annual San Diego County Fair. In 1946, 350 competitors rode for a part of the $20,000 purse and points to become champions at the show. Over the years, the Del Mar National became so popular and so big, it outgrew the Fair and became a separate event in 1979. The show and the venue evolved over time. The show was in an arena near the racetrack grandstand at one time, on the track in front of the grandstand at another and in an arena built adjacent to the racetrack chute, near the stable. The rings and locations changed over the years, as did whether being a horse show exhibitor also got you into the Fair for free. All kinds of breeds competed in various disciplines at Del Mar. Today it's Western, Dressage, and Hunter/Jumper, but the show started out with gaited horses, hackney ponies, saddlebreds, hunter/jumpers, stock horses and more. At one point, draft horses and mules competed, too. Del Mar now offers more than $300,000 in prize money and attracts more than 3,000 horses during the three weeks of competition. The show takes place in the $5.4-million Del Mar Fairgrounds equestrian complex. The Del Mar Arena is one of only two equestrian venues in the West to ever host a World Cup, which it did in 1992. Del Mar through the years has quite a few "firsts" in its history. History from press information.