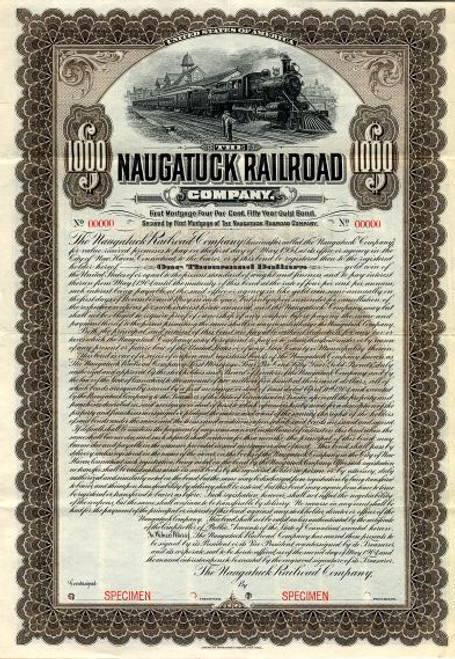 Beautiful engraved specimen certificate from the Naugatuck Railroad Company dated in 1904. This historic document was printed by American Bank Note Company and has an ornate border around it with a vignette of a steam locomotive passing thru a station. This item is over 104 years old.

Certificate Vignette
The Naugatuck Railroad was chartered May 1845 and organized February 1848. On May 15, 1849, the first section opened, from a junction with the just-completed New York and New Haven Railroad north to Seymour. Extensions opened to Waterbury June 11 and the rest of the way to Winsted September 24, where the Central New England Railway later passed through. On November 1, 1870 the Naugatuck Railroad leased the Watertown and Waterville Railroad, giving it a branch to Waterville. The New York, New Haven and Hartford Railroad leased the Naugatuck on May 24, 1887, and merged it January 31, 1906. In the mid- to late 1900s, the line was abandoned from Derby Junction north to Ansonia in favor of the original New Haven and Derby Railroad on the other (west) side of the Naugatuck River. Passenger service north of Waterbury, to Torrington and Winsted, ended in December 1958, and the line was abandoned between Torrington and Winsted in 1963. The NYNH&H merged into Penn Central in 1969; by then the line north of Waterbury was named the Torrington Secondary Track, and ended at Torrington. On January 1, 1971, the State of Connecticut and the MTA leased passenger and freight operations along the Waterbury Branch to Penn Central. By 1976 Penn Central operations were being handled by Conrail. The State of Connecticut Dept. of Transportation (CDOT) purchased the line between Devon and Torrington in 1982 from Conrail. The line north of Waterbury was leased by CDOT to Boston & Maine in 1982, and after B&M discontinued freight service north of Waterbury in 1995, CDOT leased the line to the new Naugatuck Railroad Company (NAUG). NAUG started operations in September 1996. Operated by the Railroad Museum of New England, NAUG is a heritage railway, primarily an excursion and historic passenger operation, with an irregular freight service (as-needed). About Specimens Specimen Certificates are actual certificates that have never been issued. They were usually kept by the printers in their permanent archives as their only example of a particular certificate. Sometimes you will see a hand stamp on the certificate that says "Do not remove from file". Specimens were also used to show prospective clients different types of certificate designs that were available. Specimen certificates are usually much scarcer than issued certificates. In fact, many times they are the only way to get a certificate for a particular company because the issued certificates were redeemed and destroyed. In a few instances, Specimen certificates we made for a company but were never used because a different design was chosen by the company. These certificates are normally stamped "Specimen" or they have small holes spelling the word specimen. Most of the time they don't have a serial number, or they have a serial number of 00000. This is an exciting sector of the hobby that grown in popularity over the past several years.